The Kansas City Star this week reaffirmed that it won’t let the truth get in the way of its support for Kansas Governor Laura Kelly, making a false accusation of Senate Majority Leader Dan Hawkins.  Kelly is a Democrat and Hawkins is a Republican.

In its editorial, the Star said Hawkins “claims Gov. Laura Kelly has waived work requirements for Kansans who use the Temporary Assistance for Needy Families program, known as TANF. That’s not the case.”

But Hawkins didn’t say Governor Kelly waived all work requirements, including those required by the federal government.  He accurately said the Kelly administration waived a list of requirements set forth in state law that must be met before someone is eligible to receive TANF benefits.

“EES No. 21-09-10 provides a list of requirements that will no longer need to be completed prior to the issuance of TANF benefits that include, but are not limited to, an online work program orientation and important information about work requirements.” 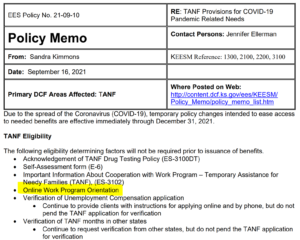 The editorial states: “A self-assessment form was suspended, for example, through the end of the year. So was the online ‘work program orientation.’ Nothing in the policy memo suspends the actual work requirement.”

But Hawkins did not suggest that it did; his letter asking the Kelly Administration to follow state law simply noted that some of the requirements had been waived.

So while it is true that the work requirements — as such — have not been suspended, given that applicants are not required to complete the orientation or be made aware of work requirements, it is unclear how the requirements could be enforced upon someone who didn’t know about them in the first place.

The Star editorial ignores actual video evidence — provided to Star columnist Dave Helling — that Whiteside-Hicks admitted on Nov. 6 that it was unclear the agency had the authority to set aside state law, as a partial transcript shows.

“You said you adjusted [the state law] so walk me through this, so if I come up and apply for TANF benefits, without completing what is in statute, when do I start getting benefits?” Questioned, Senator (Richard) Hilderbrand.

“We have a set list of things we have to do…” replied Whiteside-Hicks.

“So if I fill out the application and fulfill the federal guidelines for TANF, but not the state guidelines in statute, because you [DCF] are suspending the state requirements, you are giving me the benefits?”

“For probably a month.” responded Whiteside-Hicks.

Chairman Hilderbrand continued,  “What authority do you have to do that?”

“Uh I am going to defer that question and get back to you on that one or ask my Secretary to come speak to you,” said Whiteside-Hicks

“So you are only sticking to the federal guidelines, saying we have to do this before we give you TANF, but with state statutes you [DCF] have adjusted or suspended, you still lack the authority to do that.”

In an email exchange obtained by the Sentinel, Helling goes on to partially quote the statute, “All adults applying for TANF shall be required to complete a work program assessment as specified by the Kansas department for children and families..” (emphasis in the email) and then says: “If DCF alters or waives that requirement, the statute has still been met. Do you dispute that?”

However, the statute says “shall,” not “may,” which means DCF must require completion of the assessment.  “As specified” means DCF can design the assessment form, as Hawkins’ spokesman Moriah Day notes in the exchange.

“The statute uses the word ‘shall.’ DCF, in its own words, is not requiring the completion of a work program assessment the agency has previously seen necessary to enforce,” Day wrote. “Our office can think of no other examples where an agency has the authority to completely disregard an entire statutory requirement simply by implementing contrary policy.”

Helling consciously distorts the plain language of the law to suit the Star’s Democrat-good-Republican-bad political agenda, just as he misrepresented Hawkins’ statement of what was waived.  It’s a pattern with Helling that is likely to be replicated in the runup to Kelly’s re-election effort.  Earlier this year, the Star denied Attorney General Derek Schmidt – Kelly’s likely opponent — an opportunity to defend misleading accusations Helling made against him.

Hawkins, in an email statement to the Sentinel, blasted the Star.

“My disagreement is with Governor Kelly’s unlawful activity and I’ve made that abundantly clear from the start,” Hawkins said. “The Kansas City Star’s blatant mischaracterization of my efforts to hold the Governor accountable as some kind of attack on the entire welfare system is incredibly troubling.

“Needy Kansans depend on a reliable safety net and without strict adherence to the rule of law, there is no guarantee that the resources will be in place for those who truly need them. If the Kansas City Star believes that it is impossible to follow current law while helping needy Kansas families, they should lobby to change the law, not cover for their friend in the governor’s office.”