July tax collections included a few warning signs for Kansas legislators and taxpayers, but you wouldn’t know it from Governor Kelly’s press release or media reports.  Kelly touted income tax receipts being about $454 million higher than last July, but she forgot to mention that that’s because the April 15 filing deadline was moved to July 15.

April income tax receipts were $601 million less than the prior year, May was down $76 million, and June was about $47 million behind.  So including the July windfall from moving the filing deadline, income tax collections are now about $270 million or 14% behind actual collections compared to the prior year over the last four months.

It’s also noteworthy that July income tax collections were almost $38 million below the estimate for the month.  Individual tax receipts were $30.4 million below estimate, and collections for corporate income tax and financial institutions fell short of estimates by $5.2 million and $2.3 million, respectively. 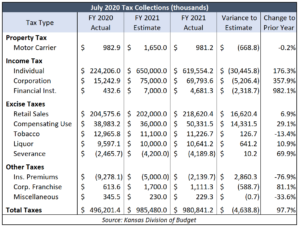 July’s shortfall from the estimate may be another warning sign.  The Consensus Revenue Estimating group only prepares annual estimates for each tax category, and it’s left to Kansas Legislative Research to allocate the total across the months.  Legislators and taxpayers need to see the collection assumptions for each month to fully appreciate the significance of the July shortfall, but estimates for subsequent months haven’t been released.

Michael Austin, director of the Center for Entrepreneurial Government at the Sentinel’s parent company, Kansas Policy Institute, says there’s little sign of full recovery before 2020 is over.

“Income tax performance is paramount to watch as it’s evident Kansans don’t have the income to support the largest state budget in recorded history.”

Austin, the former chief economist for the Kansas Department of Revenue, says the record-setting budget of more than $8 billion is about $640 million more than the official tax revenue estimate for this year, and there’s already a $1.5 billion budget deficit next year. 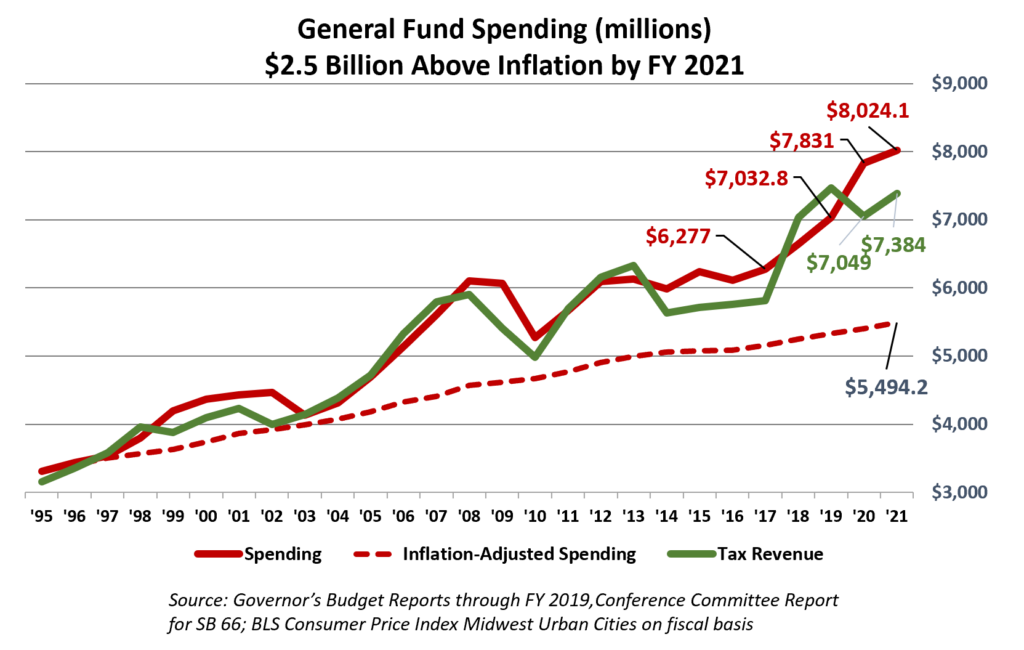 Kansas media mostly failed to report anything about July tax collections, and the few that did merely published excerpts from the governor’s press release.  Here’s one example from WIBW-TV and another from KNSS Radio.

July tax collections overall were $4.6 million below the estimate.  The monthly income tax shortfall was partially offset by a bump in retail sales tax collections, a change in online sales tax policy, and smaller refunds for oil and gas severance and insurance premium taxes.  Tax receipts are oddly reported net of refunds, so the negative revenues shown above for severance and insurance premiums mean refunds were greater than collections.

Retail sales tax was $16.6 million above estimate and 6.9% higher than a year ago. But May was down 14% and June showed a small 2% increase, so it’s difficult to know how much of July’s gain was an artificial timing shift.

The $14.3 million gain above the estimate for compensating use tax results from the Kelly administration unilaterally imposing sales tax on online purchases from out-of-state businesses. Attorney Derek Schmidt says Governor Kelly exceeded her legal authority to impose this tax hike on Kansans and her action subjects the state to legal action.