A positive report under a conservative administration receives a few sentences on an inside page (if at all), while a negative report gets higher billing and a sky-is-falling narrative on the editorial page.

For example, the Topeka Capital-Journal recently reported that Moody’s issued a “warning shot” to Gov. Sam Brownback by issuing a “credit negative” outlook report following his tax increase veto. A similar story a month earlier about a “credit positive” report following Kansas’ revamping of revenue estimations received a few sentences on an inside page of the same paper.

Listening to media, one would think Kansas has a terrible credit rating but in reality, S&P gives Kansas an AA-, which is Investment Grade and Very Strong Capacity to Pay.  Moody’s rates Kansas AA3 and AA2, meaning Kansas bonds are high quality and subject to very low credit risk. 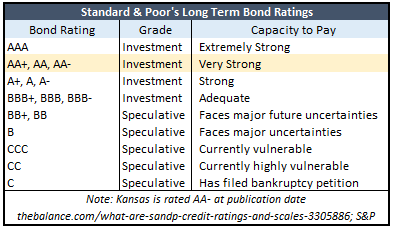 So what do these ratings and credit outlooks mean and how are they used? Moody’s and S&P have slightly different ranking systems. Moody’s uses letters and numbers to assess creditworthiness. Aaa is the highest rating, and C is the lowest. Everything rated Baa and above is considered investment grade, and everything above Aa3 is high grade, high quality. 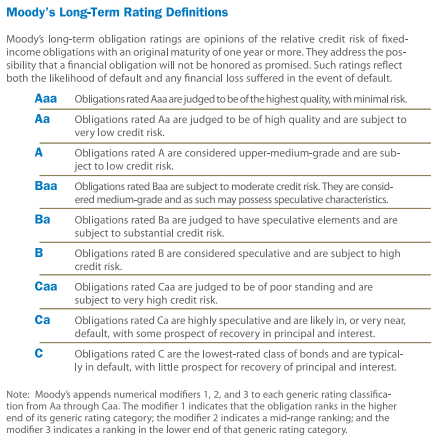 Investors use the rankings to determine the likelihood a government or entity will default on debt. Generally, the lower a bond’s rating, the higher the risk of default. In order to sell a bond with a high risk of default, investors seek a higher return on investment–or a higher interest rate–on riskier bonds.

The credit outlooks provide bond holders with perspective on the issuer’s ability to pay. It is worth noting the ratings aren’t always accurate, and the agencies are still working to regain credibility after huge failures before the 2008 recession.

As Speigel, the German equivalent of Time Magazine put it, “Lehman Brothers is a case in point. Only a day before the company filed for bankruptcy, the rating agencies were still awarding it their top ratings, namely A, A2, and A+.”

The major bond rating agencies have been covering their rears since 2010, because they missed the Great Recession.

Kansas remains a very good credit risk, and that’s apparent in its ratings from Moody’s and S&P. In a recent outlook report, however, Moody’s analyst noted that Kansas spends more than it receives. The report didn’t suggest increasing taxes but said the service may change Kansas’ credit rating when revenue aligns with state spending.

Conservatives would argue the answer is reduced spending.