Johnson County Commission Chairman Ed Eilert appointed a task force to “strategize and implement a phased approach to reopening the economy” that is mostly government officials. The 14-member task force has six county officials, three city officials, a representative from the central planning Mid-America Regional Council, a hospital CEO, executive directors of United Community Services and the Overland Park Chamber of Commerce, and a restaurant owner.

County Commissioner Mike Brown spoke with Eilert by phone, asking him to reconsider and put more business owners on the task force.  Brown relayed his frustration with Eilert’s action in an electronic communication with the Sentinel.

“I explained my concerns with an obvious lack of business members and an obvious high concentration of members from inside the I-435 loop. It was explained to me why he picked the members. He was not willing to consider changes. That left me no option but to push the issue in our meeting on Monday.

Brown’s Facebook page says the majority of task force members have little or no practical experience or connection to the business world.

“They’ve never been in a position to lay off or furlough employees. They’ve never signed the front of a check. They don’t wake up at 2am and stare at the ceiling trying to come up with a way to cover payroll or pay a bill or to deliver a product. But I have.

“A plan to get out of this isn’t a theory or something they taught in a college business class. This takes real-world experience tempered in the hot flames of “been-there, done-that”… and there is no substitute.”

He also published the names of the task force members on his Facebook page. 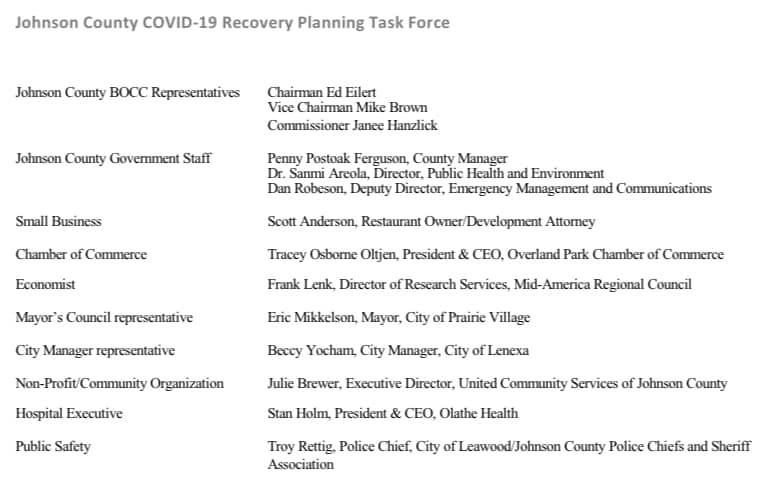