Johnson County Community College President Dr. Andy Bowne has upset some faculty members with his call for ‘equitable student outcomes.’ They fear that that is code for reducing outcomes for high achievers to close equity gaps, and Bowne wouldn’t explain his proposal or identify any specific problems when asked by The Sentinel.

In a January 11th video obtained by The Sentinel in an Open Records request, Bowne used part of his “Welcome Back” remarks to faculty and staff to share his vision of DEI implementation (diversity, equity, and inclusion).  Among Bowne’s statements that concerned several of those present was a recurring theme of “identifying and closing equity gaps” without defining the term.  Bowne also didn’t identify any existing gaps.

“We must pursue our work through an equity lens,” Bowne remarked; “this work should be reflected in equitable student outcomes.”

DEI efforts related to equitable outcomes nationwide have been controversial. The State of Oregon ended the requirement for high school students to prove proficiency in reading, writing, and arithmetic before graduation.  According to the Washington Examiner, Charles Boyle, a spokesperson for Governor Kate Brown said, “(this) gives us an opportunity to review our graduation requirements and make sure our assessments can truly assess all students’ learning”  Boyle also said  the new standards for graduation would aid Oregon’s “Black, Latino, Latinx, Indigenous, Asian, Pacific Islander, Tribal, and students of color.”

Critics contend such efforts can result in lower standards for employment qualifications and, academically restrict the progress of high-achieving students in favor of guaranteeing “equitable outcomes” for all.

Many parents believe that DEI is the ‘cover’ used to teach students that being white makes a person inherently racist and that people of color are oppressed victims of whites.  Schools insist they are not doing so, but many parents have presented documentation that confirms their position.

The Sentinel sent President Bowne the following questions in an effort to help faculty and others understand what he is trying to do:

Bowne wouldn’t respond.  His spokesperson, Chris Gray, sent an email response that did not directly address our questions, preferring to define DEI as “an important contributor” to student success, and reiterate the school’s mission as “inspiring learning to transform lives and strengthen communities.” 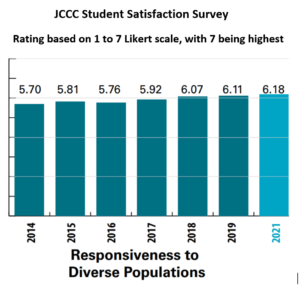 While Bowne’s talk gives the impression that JCCC has a significant diversity issue, that notion is not supported in the college’s student satisfaction survey.  Students last year gave JCCC a score of 6.18 for responsiveness to diverse populations on a 1-7 scale, with 7 being the highest possible score.  What’s more, student satisfaction has been steadily improving.

High marks for responsiveness to diverse populations and Bowne’s unwillinging to identify any specific equality problems makes it easy to see why some people question the motivations of DEI initiatives.

Faculty members won’t comment on the record for fear of retribution, but Bowne’s refusal to explain his ‘equity of outcomes’ goal only reinforces their fear that achievement and standards will be reduced.