Students in Dodge City, Kansas, next year will be seeing the national motto hanging in their buildings. 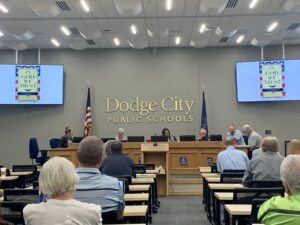 On June 13, the Dodge City Unified School District 443 Board of Education voted 5-2 to hang posters featuring the national motto “In God We Trust,” in 18 buildings within the district.

Board member Jared Goetzen made the motion to hang the posters — purchased from the national “In God We Trust,” website.

“It’s been something that was on my heart for a while,” Goetzen said. “I wanted to bring it to the board for, I think, two reasons. One … to try to get America united. What better way than our motto?

“And then … the morality issues in schools, or it’s overwhelming the amount of stuff that these kids are subjected to anymore so, you know, maybe a sign that shows them that God’s still there, maybe that maybe that changes one person.”

Board member Tracy Rankin, who voted against the motion, said in the meeting she was concerned about lawsuits.

“I think there’s enough case law that shows contested things like this separation of religion in schools can be very costly on districts,” she said. “Historically, I don’t think that it’s worth the cost to put a poster on a wall, for the cost it may take.”

Rankin also noted the diversity of Dodge City — which is majority Hispanic and has large immigrant populations from West Africa and Vietnam as well — and was concerned about how students of different faiths might view the posters.

“I think it’s very exclusionary, on a certain group of students and staff, that may be Jewish, Muslim, Buddhist or atheist,” she said. “It can create an avenue for bullying for those who are not Christian, because it’s posted and supported, and then it excludes other people’s religious references.”

Those sentiments were echoed by board member Lisa Kilian.

“I’m also a Christian,” she said. “I agree with Tracy that as far as putting a poster on the wall, I don’t see the benefit of it. But I see that it could, like Tracy pointed out, it could cause some bullying. It could hurt our district, it could hurt some of the organizations that are currently in place that do … minister to students in need — and that’s my concern.”

Courts have ruled in favor of national motto

However, contrary to Rankin’s assertions, case law on the national motto is precisely the opposite.

While the United States Supreme Court has never directly ruled on the motto being displayed in schools, it has referenced it in several cases, and the New Hampshire Supreme Court, as well as Second, Fourth, Sixth, Eighth, Ninth, and Tenth Circuits have all upheld the constitutionality of the motto in various settings.

John Bursch, senior counsel and vice president of appellate advocacy at the Alliance Defending Freedom said the motto has nothing to do with the First Amendment’s “Establishment Clause,” referencing the recent Kennedy v. Bremerton decision.

“In the Coach Kennedy case, the Supreme Court explained that when considering claims under the U.S. Constitution’s Establishment Clause, courts should look to history and tradition to determine when the government crosses the line and ‘establishes’ an official government religion,” he said. “The national motto ‘In God we Trust’ has appeared on our dollars and coins for many decades, and no one reasonably thinks that practice establishes a national religion.

“That’s the same reason that Congress still opens its sessions with prayer and why the U.S. Supreme Court has the 10 Commandments on a relief inside the courtroom, yet no one questions the constitutionality of that practice or that artwork.

“It should be no surprise, then, that federal courts have consistently upheld the constitutionality of the national motto.”