Last week a record 55,428 people filed for unemployment in Kansas, and nationally the number stands at 7.14 million due to the ongoing COVID-19 crisis — numbers which are only likely to get worse as the statewide shutdown continues into April. 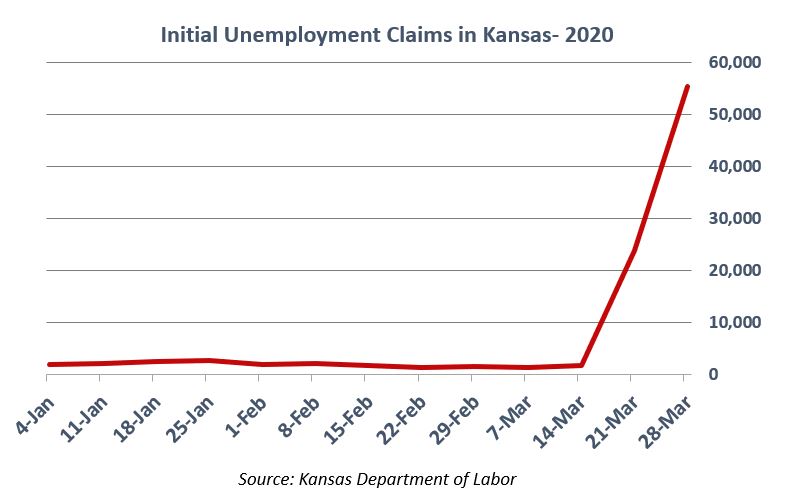 Even the health care industry is being hit hard.

Stormont Vail Hospital in Topeka is cutting the pay of every employee not involved in “face-to-face” patient care in the hospital’s acute and ambulatory care settings — because of a shutdown in non-emergency surgeries and visits. Those sorts of services are the engine of financial health for most hospitals.

According to NPR station KCUR, starting April 5, everyone else gets a cut to their base pay, ranging from 10% to 50%. Stormont Vail hasn’t said how many people that affects, but the hospital has 5,300 employees.

One group of people, however, that may not be facing the unemployment line are government employees.

The City of Wichita last week did issue a hiring freeze and “temporary furlough for a limited number of full-time and part-time city positions that are unable to perform work remotely,” the Wichita Eagle reported.

The Sentinel reached out to several local governments across the state to see if any workers were being furloughed.

Reilly also told the Kansas City Star that budgeted pay raises for the city’s more than 1,400 employees have been postponed for the next 60 days.  But that’s not sitting well with Mike Mosher, president of the fraternal order of police.  He told the Star the pay freeze affects more than 225 officers who are working during the coronavirus outbreak.

“This also affects the amazing men and women of our public works, fire department and other essential city services,” Mosher said in a statement to The Star.

Johnson County Government’s county manager signed a furlough executive order yesterday. This approach will be used for employees who temporarily do not have sufficient work during the pandemic. Yesterday, 46 Motor Vehicle frontline employees were put on furlough due to those offices being closed to the public. No employees are on paid administrative leave due to COVID-19.  The county budgeted for more than 4,000 full-time equivalent employees this year.

Wyandotte County and the City of Prairie Village told the Sentinel that no employees have been furloughed so far.

In Southeast Kansas, City of Pittsburg Public Information Director Sarah Runyon said the city has not made any decision to furlough workers. Crawford County Commissioner Tom Moody (D-Frontenac) said the county is keeping all offices open, but allowed the various elected department heads to decide how best to do so. Moody said most are running two crews who come in on alternating days.

He did say that some employees with underlying health conditions that would make them vulnerable to the Coronavirus have been furloughed, and will be subject to recall once the quarantine is lifted.

Great Bend City Manager Kendal Francis said they are not furloughing employees and have no intention to.

Ford County in Southwest Kansas has not furloughed any employees, County Administrator Johathan Gilbert said, but rather has put “non-essential” employees on paid administrative leave.

He did not say what percentage of Ford County employees are considered “non-essential,” and declined to give an absolute number of employees on paid leave.

“We don’t track that information because we didn’t approach the stay-at-home orders like many other agencies,” he said in an email. “We were trying to determine which processes and services were essential, not staff. So, that number changes daily depending on where we are in the cycle of business. Essentially, any number I give … will be inaccurate because county services are highly complicated.”

The Sentinel also reached out to Barton County, Dodge City, Ellis County, and Hays, as well as Olathe and Leawood but did not receive any response.

“The economic impact of the COVID-19 situation on taxpayers will be significant.  The economic shutdown will result in much lower tax receipts for the foreseeable future. No one wishes for anyone to lose pay or hours, but Kansans in the private sector are hurting, and they can’t afford to keep funding full government employment. State and local officials should be taking immediate steps to reduce costs in cities, counties, universities, state agencies, and schools.”

KPI, which owns the Sentinel, recommends the first step should be a hiring freeze, and not replacing anyone who retires or resigns. U.S. Census data in KPI’s 2019 Green Book shows Kansas has 37% more state employees per-capita than the national average, and 35% more local government employees.  Trabert says that’s a strong indication that a hiring freeze can be effectively implemented.

The unemployment pain for the owners and employees of small business may be getting worse.

Reuters reports small businesses across the country are afraid they may be squeezed out of the Paycheck Protection Loans the recently-passed $2.3 trillion COVID-19 response bill made available.

According to the report, private-equity firms, venture capital funds, and other large investors are also angling for a piece of the action.

Gary Selvy, the executive director of state government relations for the National Federation of Independent Businesses, said it is a potential problem.

“As of 10:30 a.m. (April 3), over 2,300 PPL loans had been granted in excess of $800 million,” Selvy wrote in an email to the Kansas Policy Institute, the parent company of the Sentinel. “The applications went live at midnight (April 2.) It appears that mid- to larger-small businesses who already had banking relationships, were in the queue and are sucking up all of the stimulus money.

“We are concerned that 1) the authorized money will run out before the small guy gets to apply and 2) many small businesses won’t even be given an opportunity because they didn’t already have a banking relationship in place. If there is a COVID-19 package in the works, it may very well need to have additional funding similar to PPL but specific to the smaller business who may be left out of the current stimulus package.”