The Tax Foundation last year said Kansas has the highest effective tax rates in the nation on mature businesses, and that sentiment is reflected in the annual business climate survey sponsored by the Kansas Chamber of Commerce.

The survey of 300 business leaders from across the state and up and down the spectrum of Kansas businesses noted that in 2021 only 35% of those surveyed believed Kansas has “the best business climate in America.”

Meanwhile, 57% disagreed either somewhat or strongly with that statement.

“Each year the Kansas Chamber asks business leaders from across the state to name the most important issues they face. This year’s poll found concerns about the Kansas workforce are skyrocketing,” said Chamber President and CEO Alan Cobb. “Kansas job creators are looking for leadership and solutions to our state’s workforce challenges. While more than a third plan to increase their staff during the next year, business leaders believe the quality of the state’s workforce is the top issue they face. Forty-four percent are unsatisfied with the available workforce which leads to a 10% decrease in those who are satisfied with public education.”

A lack of will to work is the #1 reason business leaders say they don’t rate the workforce higher, followed by a lack of education, and it being too easy for people to get benefits that allow them to not work.

According to the Kansas Department of Education, there are more high school students below grade level in math than are on track for college and career.  The 2021 ACT results show that only 21% of Kansas graduates are college-ready in English, Reading, Math, and Science. 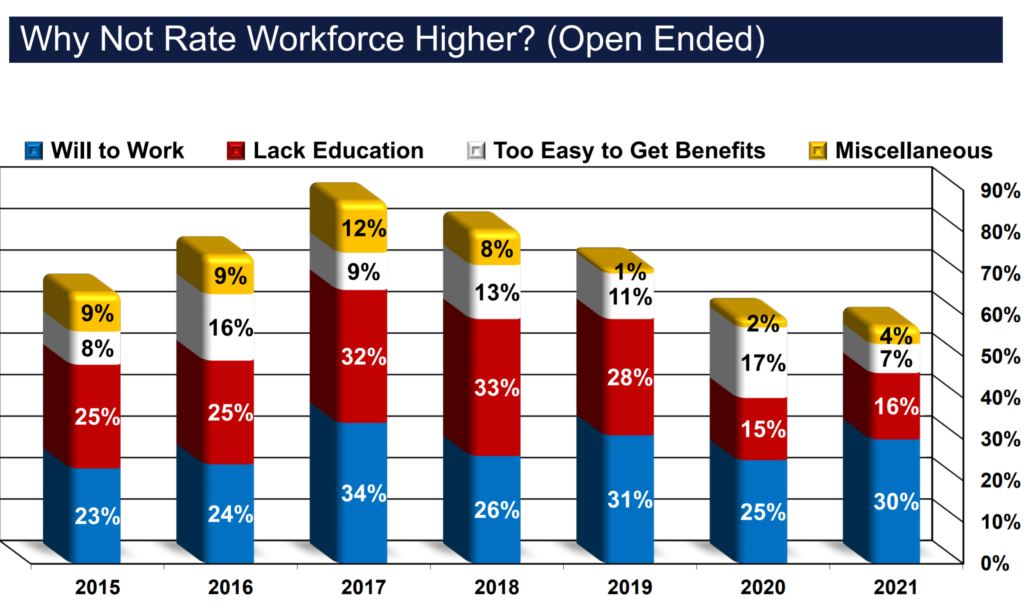 The scientific survey is commissioned annually by the Chamber and conducted by Cole Hargrave Snodgrass and Associates (CHS) to gauge their thoughts and concerns regarding the Kansas business and political climates.

According to CHS, taxes remain a top concern even as Kelly has vetoed tax cuts, forcing the Republican legislative supermajority to override many of them.

We found tax sensitivity is really trending up,” said CHS President Pat McFerron. “Unemployment compensation concerns climbed into double-digits for the first time as an issue for business profitability because it is seen as a hindrance to people entering the workforce. Limiting the growth of government also is higher than ever and energy costs are the highest since 2013. Ultimately, however, these are all dwarfed by concerns about taxation.”

In June of last year, Kansas Governor Laura Kelly and her administration touted an award from Site Site Selector magazine as having the top business climate in the West North Central region of the United States, but that is most reflective of the Kelly administration’s preference for offering subsidies to entice businesses.  Relatively few businesses benefit at the expense of everyone else.  Indeed, the Tax Foundation said subsidies are part of the reason Kansas has the highest effective tax rates on mature businesses.

COVID-19 is also a concern for business leaders

Taxes and education aren’t the only issues on business leaders’ minds.  They are also worried about government interfering with them, particularly on COVID-related matters.

“The debate about how state government should act to get the economy growing has shifted dramatically. In 2020, it was all about either instituting or not instituting restrictions. This year the message is clear. Businesses do not want government in the middle of their relationships with their employees as they continue to work to navigate the virus’ ongoing impact,” said McFerron in the release. “Today we have many more interested in getting government out of the process. These are generally very anti-government sentiments. Less than 1% asked for more stimulus spending.”