Hundreds of people gathered in Topeka yesterday at the Open Up Kansas! rally in opposition to the economic impact of Governor Laura Kelly’s statewide shutdown in reaction to COVID-19.  One of the organizers told the Sentinel that their rally was “focused on small businesses and that the current policies of [Governor Kelly] are causing more harm than the virus.” 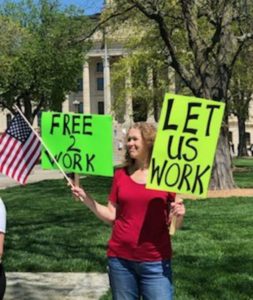 The organizers say small businesses are not non-essential and shouldn’t have to remain closed.

“It was a very decent and respectful crowd just using a creative way to present their grievances to the government. I was surprised how middle class, almost suburban soccer mom type vibe I got.  A lot of young families with kids in SUVs, veterans, business owners were all there.  It was a genuine cross-section of Kansans.”

But that didn’t stop one left-leaning activist group from accusing protestors of harassing ‘nurses.’

Take Back Kansas says it wants to “restore sane and effective governing” to Kansas and is heavily critical of what it calls “conservative policies.” 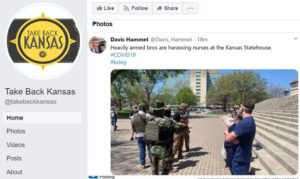 They shared a photo of the event on their Facebook page, captioned, “heavily armed bros are harassing nurses at the Kansas Statehouse.”

Except the ‘bros’ weren’t harassing anyone, and, according to KSNT-TV, the people in scrubs weren’t nurses; they were rally attendees dressed in hospital scrubs with a sign that read “Thank you all essential workers.”

Audio of the ‘bros’ exchange with the ‘nurses’ that was taken by ralliers and shared with the Sentinel confirms it was a friendly conversation.

Waggoner says he was joined by other legislators and they were all were very pleased by the crowd and everything they saw.

“We would be pleased even more if Laura Kelly finally listened to the heart cry of citizens and business owners across the state to Open Kansas Up!”