Optimism, determination, accountability, respect. Those are integral elements of the culture at the Wabaunsee school district, and it shows in test scores and in the attitudes of the students, faculty, parents, and community members.

For the last several years, state assessment scores in most Kansas districts have been trending downwards, but USD 329 in Wabaunsee County has been bucking the trend.  For example, math proficiency in Wabaunsee steadily improved from 40% in 2018 to 50% this year, while the state average dropped from 32% to 29%.

The Sentinel asked Superintendent Dr. Troy Pitsch what his district was doing differently.  He just took over the district’s reins in July of this year and said he couldn’t take any of the credit, but there is something different from his previous postings.  He invited us to “come see” what he called “Element X” and we took him up on the invitation on Nov. 4, 2022.  After a tour of the district, this reporter took part in a 12-person panel discussion with teachers, students, community members, members of the administration, and the president of the USD 329 board of education.

Culture is the difference in Wabaunsee

The adults and students in the discussion didn’t point to a single “Element X.”  They spoke of several things, like having a small, tight-knit, rural county with a fairly demographically homogeneous population, but that is hardly uncommon in Kansas. 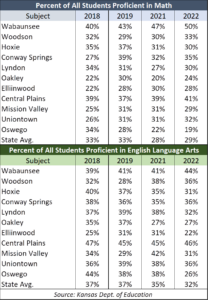 The district’s size — about 425 students — may be a contributing factor, but while other districts with similar enrollment, shown in the adjacent table, tend to do better than the state average, they don’t have the steady improvement trend like Wabaunsee.

The driving factor seems to be a noticeably different culture of accountability and mutual respect that pervades every aspect of the district.  The collaborative atmosphere between parents, students, and the district is unlike anything the Sentinel has experienced elsewhere.

Wabaunsee High School physics and chemistry teacher Lisa Hall, who, unlike many of the educators in the district, is not from the area, said she’s noted a distinct lack of finger-pointing between parents and the school.

“I’ve often been put in a situation by parents and community members (where) they’re blaming the teachers for lack of student success,” Hall said of other districts where she’s taught. “And of course, teachers are often blaming the family, ‘well, this kid comes from a bad family, or they don’t have parents’ support, or they don’t have an environment where they can study.’

“Here, those two things are one and the same. Here, the community members and parents and teacher, they’re all unified, There’s no finger pointing.”

Starting in 2016 and 2017, every district in the region showed reductions in proficiency at about the same time the Kansas State Department of Education began de-emphasizing academic improvement in 2016 with its Kansans Can initiative and putting more emphasis on so-called “Social Emotional Learning.”

In contrast, while the educators present said SEL is important, academics are the primary focus of the district.

“We are a data-driven district, we meet the kids where they are,” first-grade teacher Susan Gronquist said. “So although we have a standard to meet, we work with them and get them to those standards.

“We have intervention groups, we have support from the community, we have support in our schools, from our administration, to take the latest research and apply that in our classrooms and use the data and continually assess, so that we know exactly where our students are, so we know what interventions that might need to be put in place to help that student succeed. When the student feels that support … they aren’t left floundering or ‘nobody cares.’ They know that you care because you’re helping them succeed.”

Pitsch said in a phone interview that numbers began to trend back upwards around the same time the district started using the “Leader in Me” program as part of their SEL curriculum, but at the same time, teachers said SEL isn’t something that’s emphasized as separate from academics but is just part of everything they do.

But this isn’t the SEL that some parents feel is an invasion of family privacy and bleeds into diversity, equity, and inclusion (DEI).  In Wabaunsee, SEL is about leadership development.

Leader in Me is a program developed by Steven Covey, author of “The Seven Habits of Highly Effective People,” adapted to an educational setting.

“What we consider SEL is leadership development,” Pitsch said.

That was echoed by teachers who said SEL simply infuses every interaction with the students and by students who say they take ownership of their own grades and their own success.

Emphasis on academic improvement and accountability

By contrast, academic improvement is the primary focus in USD 329 Wabaunsee.

Grade school students, for example, have “goal books” which contain their “Wildly Important Goals” or “WIGs” that include things like test scores and future goals. By junior high and high school, those numbers are entered into Google spreadsheets for the students to track.

Payton Wertz, a student at WHS, said that focusing on their own scores has helped her with a subject she struggles with — math.

“That’s always been a subject that I’ve struggled with, and the teacher  … she would have us all fill out a Google spreadsheet of the test score that we scored and where we want to be by the end of this quarter,” Wertz said. “And almost every time you see that increase because you want to get better, because why would you not want to? We want to improve ourselves, we want to be prepared for when we go to university or trade school, or join the family business.”

Pitsch, who did not participate in the focus group, but watched carefully, noted that focus as well.

“They’re watching their scores, like kids look at after-action screens on video games,” he said. “They’re looking at their data. So they’re plotting trajectories in their head where they’re setting goals themselves, and they may not be articulated goals, but maybe just the goal is ‘I want to do better than the time before’ kind of thing.”

“The improvement in performance has garnered the interest of other districts,” he said. “Some of whom have requested the opportunity to visit the district and learn more about USD 329’s approaches to student learning.”