The folksy saying that goes ‘Don’t spit on my boots and try to tell me it’s raining’ means ‘don’t try to deceive me with a brazen false claim.’  That saying came to mind while reading a recent column by Wichita State University professor Dr. Aaron Rife in the Wichita Eagle.  Rife teaches in the Education Department at WSU, preparing students to become teachers.

Dr. Rife claimed that parental choice programs don’t work because they exacerbate school segregation.  He used some enrollment statistics in Arizona, Florida, and Indiana to make his case, but he would not present documentation of his claim when I asked him.  So to confirm my understanding, I contacted Paul DiPerna, Vice President of Research and Innovation at EdChoice; DiPerna previously worked at the left-leaning Brookings Institute. 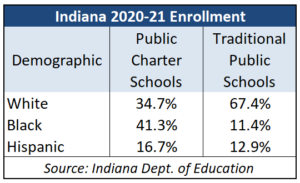 That is also the case nationwide.  Enrollment data for the 2016-17 school year – the last year available – from the National Center for Education Statistics at the U.S. Department of Education shows White students comprised 49% of traditional public schools but only 32% of Public Charter schools.  Black student participation increased from 15% to 26%, and Hispanic participation rose from 26% to 33%.

Dr. Rife tried to make demographics the litmus test for parental choice programs, and while desegregation is a big win for choice, the real measurement is the impact on student achievement.

This is especially important for parents in Kansas.  The 2019 state assessment results from the Kansas Department of Education show Black high school students are twice as likely to be below grade level as White students, who are almost four times as likely to be on track for college and career.

Similar achievement gaps exist for low-income students in English language arts on the state assessment test and for students of color on the ACT exam.

Gains in other states while Kansas goes backward

The picture for low-income kids and students of color is much brighter in states like Arizona, Florida, and Indiana that have taken bold action to close achievement gaps with robust school choice programs. 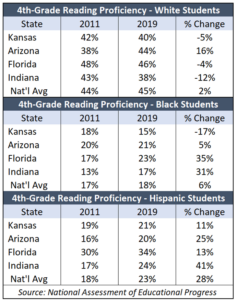 But proficiency for black students went backward in Kansas, declining by 17%, from 18% to just 15%.

Proficiency for White students in Kansas, Florida, and Indiana declined, while Arizona and the nation showed improvement.

Given this irrefutable data, you might find it hard to imagine why people like Dr. Rife insist that students, especially minorities, are better off staying in traditional public schools.

But this quote from his column provides insight.  Rife writes, “On the whole, student performance is not necessarily determined by teachers and schools as much as it is an indicator of larger forces at work in our community. When disadvantaged students underperform in schools, we must address factors outside of the classroom.”

Outside the classroom functions must be addressed, which is why the Legislature appropriated over $5 billion in extra targeted funding to address those issues for at-risk students.  But a 2019 Legislative Post Audit found most of the at-risk funding they reviewed “was used for teachers and programs for all students and did not appear to specifically address at-risk students as required by state law.”

Like his colleagues in public school administration, Rife puts the blame for underperformance on factors outside the classroom.  And also like his K-12 colleagues, Rife has no solutions for resolving the decades-old achievement gaps.  When asked ‘how long will it take the K-12 system to at least get low-income kids and students of color to grade-level,’ school board members and administrators refuse to directly answer the question.  They know the answer is ‘never’ but they won’t admit it.

Resolving enormous racial and socioeconomic achievement gaps is the social justice/civil rights issue of our time.  Yet education officials vigorously oppose efforts to get students the education they deserve, and that won’t change until voters put enough pressure on legislators to give kids a fighting chance with parental choice. They may have the sincerest belief in their preferred solution but the proof is in the pudding. Doing more of the same but “with more resources” has done nothing to close achievement gaps. 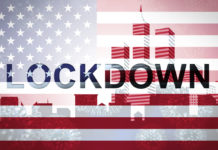