One week ago the owner of the Kansas City T-Bones baseball team, Adam Elhert, announced he would sell the team to cover debts.  A letter of default on behalf of the unified government says the team still owes them over $222,000 for utilities and lease fees, and the Kansas City Board of Public Utilities is owed almost $329,000.  Media reports from Ballpark Digest and KSHB-TV say the team currently owes more than $365,000 to the Unified Government of Wyandotte County, and another $394,000 to KCBPU.

In 2003 the Elherts family paid $12 million to build the CommunityAmerica Ballpark. The ballpark is across the street from the Kansas Speedway, near the Sporting KC professional soccer arena, and adjacent to the Legends shopping area. It is in a prime location, but still can’t make ends meet. 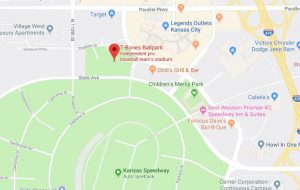 The T-Bones failure raises viability questions for the City of Wichita’s plans to spend $78 million building a baseball stadium.  The Wichita stadium lacks the location advantage enjoyed by the T-Bones baseball team.  Average attendance last year at T-Bones games according to Ballpark Digest was 3,958; that’s considerably more than the average attendance of 2,263 at Wichita Wingnuts games in 2018.

Wichita residents have a financial stake in the outcome of the T-Bones failure because, like the proposed new Wichita stadium, the T-Bones stadium was financed with government debt known as STAR bonds. The Unified Government of Wyandotte County and Kansas City, Kansas bought the T-Bones Ballpark from the Elherts family in 2013 for $8 million, using money from the Village West Sales Tax Revenue Bonds, as authorized by the State of Kansas.

“This would be the classic case then if the government is willing to buy the stadium, why shouldn’t I sell it and lease it back,” says Art Hall, director of the Brandmeyer Center for Economics at the University of Kansas. “The only question is, why would the government have ever done that.”

By purchasing the stadium, the government took over a failing business. The ongoing problem in the five years since then the government purchased the ballpark is that the financial problems of the team have not gone away. The Unified Government is making utility payments for the team, which means taxpayers are footing the bill.

“You can imagine them saying you know it is all part of a package and it would be safer if we have control of the asset,” Hall.

Bringing the ballpark into the STAR certified the view that it was a tourist attraction, albeit one that from attendance numbers was not drawing a lot of people. Hall notes that there is perceived value in having a ballpark, even one that is losing money.

“Having a baseball team is not different then what they are doing in Wichita. It’s a regional entertainment tourist type thing,” says Hall.

The T-Bones are not expected to leave the stadium, and the ballpark is leased through the 2022 season. There is currently no sales agreement in place for the team.

The Sentinel is submitting the following questions to Wichita City Council members and will report their individual answers next week.