USD 334 Southern Cloud, with only 146 students and 41 employees last year, is one of the smallest school districts in Kansas but three of the 13 highest-paid employees belong to the 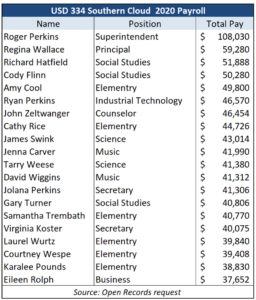 same family.  Superintendent Roger Perkins was paid $108,030 last year, his son Ryan Perkins, the Industrial Technology teacher, was paid $46,570 and his wife Jolana was paid $41,306 as the school secretary.

The remaining 17 teachers were paid less than the school secretary, but this is by no means a unique situation.  USD 500 Kansas City, one of the districts that sued claiming to be underfunded, pays some of its custodians more than the average teacher pay for the district.

The complete payroll listing for Southern Cloud is available at KansasOpenGov.org.

This is the first year KPI added Southern Cloud to the list of district payroll reports, which now totals 30 districts.

The other district in Cloud County, USD 333 Concordia, had 1,077 students enrolled.