Despite mounting frustrations over the inability to file unemployment claims on the Kansas Department of Labor website and massive unemployment increases, Governor Kelly is considering extending her shutdown of the state’s economy beyond the April 19 expiration of her current order.

KSNT-TV reports that state labor department officials say the website is experiencing “extreme technical difficulties” and has been down most of the last two days.

A press release from Kansas Senate President Susan Wagle (R-Wichita) expressed her extreme displeasure with the department’s handling of the situation.

“Governor Kelly’s focus has been on removing the Legislature’s check on her power through a frivolous lawsuit rather than ensuring her administration is addressing the needs of Kansans. This failure has been brewing since the pandemic began and Kansans have run out of patience. We have spent more than 47 million dollars on a new computer system for the Department of Labor and invested in increased call center bandwidth. The problem with processing unemployment claims is nothing more than an inability to properly manage the agency.  Kansas workers who have been laid off during this pandemic need quick action and attentive leadership in order to collect both their Kansas and their Federal compensation.” 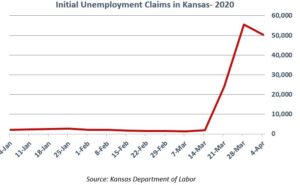 KDOL hasn’t published the number of new claims filed for the week ending April 11, but there were about 130,000 claims filed over the previous three weeks.

Governor Kelly in her press conference today blamed the problem on “decades of neglect” and pledged to “continue to build capacity.”