Wichita USD 259 is changing grading for K-5 students for the 2019-2020 school year to a system called Standards Reference Grading (SRG) in lieu of traditional A-F grades. The program is slated to be expanded to all schools in the district within the next few years. At a Q&A session for parents, USD 259 officials made their sales pitch to parents and family for why SRG is the next silver bullet in education.

At its core, SRG moves away from A-F grades to a zero-to-four-point scale. The proficiency scales revolve around students demonstrating mastery of learning objectives, no matter how small. A zero which corresponds to the traditional ‘F’ is nearly impossible to get given that a student can get graded by simple classroom observation. The proficiency standards available on the USD 259 website illustrate the very specific points a student must know. According to David Dorsey, an education fellow with the Kansas Policy Institute, the parent company of The Sentinel, it is not hard to interpret SRG as a ‘no-fail policy’ for Wichita students.

“That would be a great thing to do if there was accountability, which there isn’t because the kid is going to get passed along to the next grade anyway.” Dorsey continued, “They could get zero standards right, and they aren’t going to hold them back. They will say ‘well this little guy can’t do this,’ and on and on they go.”

The Frequently Asked Questions page at USD 259 confirms that students will not be held back even if they’ve not mastered a minimum amount of content.

Grades are no longer compiled from points awarded on quizzes, tests, and assignments; instead, points will be given for proficiency on an objective. The Sentinel reached out to USD 259 to find out how this the shift to SRG will impact student achievement and received no response to our questions.  We asked because the district has a very serious achievement problem.  The 2018 state assessment results show almost half of the students in USD 259 are below grade level in math and English language arts, about a third are considered at grade level but still need some degree of remedial training, and less than a quarter of students are on track for college and career. 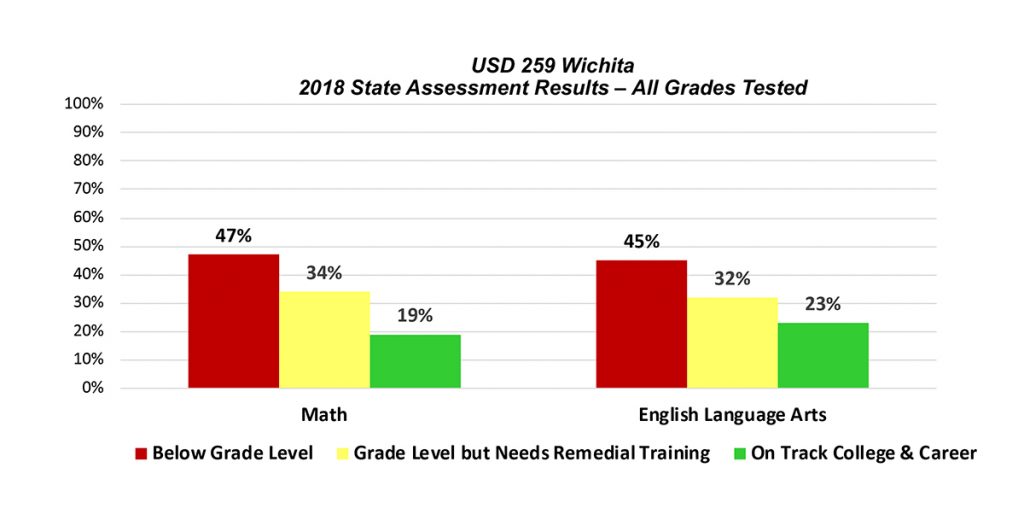 Rather than improving achievement, the purpose of the massive effort behind a shift to standards-referenced grading is about fairness.

At the Q & A session, Christina O’Toole, the Executive Director of Curriculum and Instruction at USD 259, gave an example of two students having ‘B’ grades on the old system. One student got perfect scores on tests taken but missing a test and getting an F  dropped the overall grade to a ‘B’. The other student took all the tests but didn’t do as well, and improved the grade to a ‘B’ through extra work and effort. The district contends the student who got the ‘B’ through extra credit and hard work is not deserving of the grade because they have not demonstrated proficiency in the subject. O’Toole said the student who has mastered material deserves a higher grade, maintaining it “unfair” that a missed test or quiz dropped the grade average. This perceived unfairness toward students is what prompted the change.

“We wanted to look at what we were doing when we were giving grades,” said O’Toole.

In reality Kansas learning standards require students to learn far more than teachers have time to teach. A standard refers to what every student needs to know to do by the end of the year.

“We know it would take 15,000 hours to teach all of our standards that we have adopted. Between kindergarten and 12th grade we have nine thousand hours with them. So we have everything we need in our standards, but we do not have enough time. So we need to prioritize what is the most critical thing students need to be able to do by the end of the year,” said O’Toole.

Not factoring behavior and work ethic into grades is among the nationwide criticism of standards-referenced grading.

“Academic achievement will be recorded separately from behaviors,” said O’Toole.

This means the kids who don’t miss classes and tests but still show proficiency will get a higher grade than the student who may struggle throughout the year to learn, but works hard to do so and doesn’t miss class.  Students will no longer be able to improve their grades through extra effort.

“Extra credit and bonus points are not necessary so we do not use them,” says O’Toole.

The focus seems to also have been taken off of getting work turned in on time. Completing work on time is considered a behavioral issue and not an academic one according to Marzano Resources noting, “A score of 0 is never recorded in the grade book if a student has missed an assessment or has not completed an assignment.” The theory behind it is that only scores that speak to knowledge can be recorded, not for behavior such as late work. So a student may not turn in work at all and be observed with partial proficiency by something a teacher witnesses, and the student is deemed worthy to move on. This especially noteworthy as Marzano believes 50% is a passing grade.

“We have unobtrusive assessment, where the professional teacher in the room may be collecting data on where a student is at, and they may not know that that is data being collected,” said Andria Giessen, Assistant Superintendent of Learning Services at Wichita Public Schools “Everything your child shows me informs the score that they have on proficiency scales.”

Dorsey is concerned about how standards-referenced grading will impact middle and high school students who grapple with topics that are more complicated and therefore more open to interpretation.

“I am kind of confused about it going to the middle and high school level, cause there, like it or not grading of the subject seems a lot more objective rather than elementary which is pretty subjective,” said Dorsey.