A property tax transparency bill is headed to the Kansas House of Representatives for consideration. The legislation, Senate Bill 13, would require local city and county governments to notify property owners and vote on the entire property tax increase they impose after holding public hearings.

According to Sen. Caryn Tyson, a Parker Republican who serves as chair of the Senate’s tax committee, the transparency legislation will make it clear to property owners when and why their property taxes increase. It might also help drive down property tax increases, which lawmakers on both sides of the aisle agreed, are hurting Kansas property owners.

SB 13 is based on Utah and Tennessee legislation that has existed for decades.  In Utah, the effective property tax rate declined 7.5% between 2000 and 2018, but the effective tax rate in Kansas jumped 22% at the same time.

“Property tax is probably the most regressive way to tax someone,” Olson said. “In my area, we’ve seen property taxes go through the roof. My personal residence went up about $800.”

“I want to be real clear about this too,” Holland said. “This is not going to be a panacea for everything. If you live in a high growth area, you’re still going to see taxes going up.”

Currently, local officials vote to approve budgets — not actual tax rates. Once they adopt a budget, the city clerk calculates the tax rate necessary to cover the budget. Local officials often claim they didn’t increase taxes, referencing the mill rate, while spending and collecting more due to increases in property valuations. The proposal doesn’t prevent cities and counties from raising taxes. However, it does require local officials to vote on the entire property tax increase, whether the increase is a result of higher property values or higher mill levy rates.

KPI analyzed tax rates in 50 of the largest cities and counties to reveal an average property taxes increase of almost 4% this year, which is about four times the inflation rate.  But local officials insist they aren’t raising taxes. For example, Johnson County touts a small reduction in the mill levy rate in its budget message to taxpayers, but there’s a 4.3% tax increase buried in the budget.

“This is a 6% honesty gap,” Trabert said. “Elected officials are pretending taxes are going down 1.7% when it’s really a 4.3% increase. And these are not isolated incidents.”

The legislation revokes a tax lid lawmakers adopted in 2015. The tax lid requires city and county officials to let the public vote when local tax revenues exceed inflation. When they passed the tax lid, lawmakers hoped it would help drive down property tax rates. It didn’t, in part, due to a bevy of exemptions for things like new roads and police.

“The tax lid was kind of like this today. It didn’t age well. This will not age well,” Doll said of the property tax transparency bill the Senate adopted on Thursday.

Doll didn’t say why he believed SB 13 wouldn’t ‘age well’ but he offered an amendment to require the state to give money to city and county governments, with the hope they would use it to reduce taxes. A similar provision exists in state statute today, but lawmakers haven’t funded it for several years. The Local Ad Valorem Tax Reduction Fund (LAVTRF) was created nearly two decades ago. Doll’s amendment would force lawmakers to give about $54 million annually to cities and counties.

“This is true property tax relief, instead of pounding (city and county officials) over the head with mandate after mandate,” Doll said of his amendment. 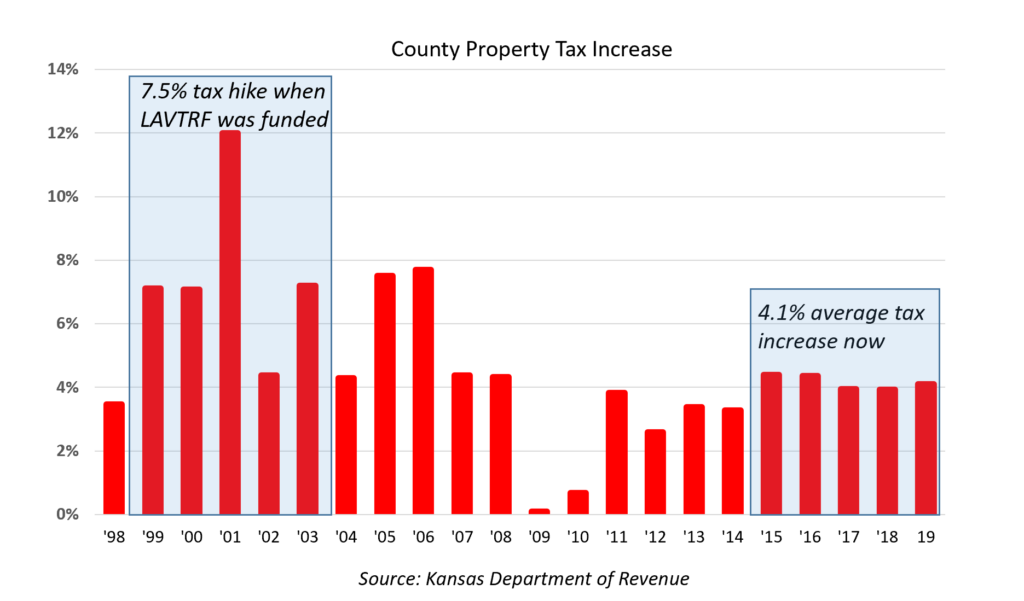 Doll also said the legislation was rushed, though lawmakers passed a similar bill last session. Despite its passage with overwhelming majorities in both the House and Senate last year, Gov. Laura Kelly vetoed it.

She said it would “place significant administrative burdens on local governments when local officials should be focused on addressing the threats and challenges of COVID-19 in their communities.”

The House is set to host a committee hearing on the property tax transparency legislation next week.