Olathe USD 233 officials stress in their campaign materials and public statements promoting the upcoming $298.3 million school bond issue that there will be no tax rate increase if 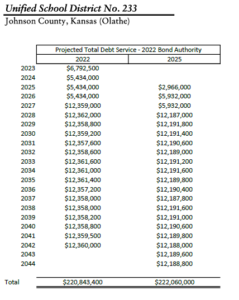 the issue passes. That is true, but also somewhat misleading.  Property tax will decline if the bond issue is defeated, but those details aren’t made clear to taxpayers.

The Sentinel has confirmed that property taxes to the Olathe district would be $443 million lower over the next 22 years, according to a debt service chart provided by Deputy Superintendant John Hutchison.

Many school bond issues are timed so that payments for principal and interest commence at or near the end of debt that will be paid off.  That allows bond issues to be ‘sold’ as not increasing property tax, but taxpayers most often are not clearly informed that taxes will decline if no new debt is issued.

A slide in Olathe’s school bond packet shows there would be no tax rate increase upon passage.  The black bars reflect principle and interest payments remaining on existing debt, and the light gray bars show the debt service payments for the proposed bond issue.  The tax rate would be lower beginning next year if the new bond issue doesn’t pass. 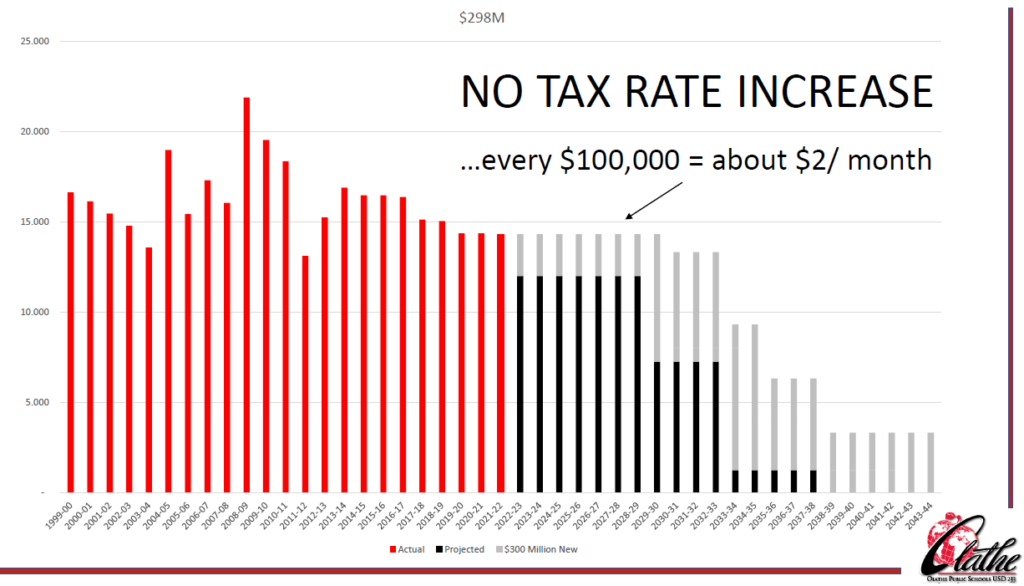 Deputy Superintendent John Hutchison says the new money will touch each of the nearly 30,000 students in the Olathe District:

”The money from this bond election will be used to create better learning environments for each and every student in the district,” Hutchison said. “With our community’s support, we will continue to provide a world-class environment for dynamic learning to take place.” 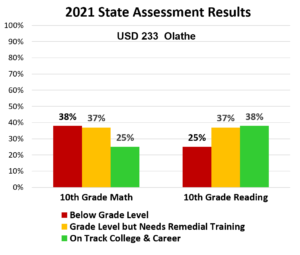 “We know that historically our patrons have supported the education that we provide our students through their reinvestment into our district,”  “Not only do our students gain from this reinvestment but so does the greater community through a well-educated workforce and strong property values.

School districts typically say, or at least imply, that taking on new debt will help achievement, but they always object to including those costs in per-pupil spending comparisons.

Ballots for the all mail-in election are due by noon on Tuesday, March 1st.