The Prairie Hills School Board meets December 12th  to consider closing the Wetmore Academic Center, and is expected to schedule a future vote on the controversial proposal, over the objections of Wetmore patrons, who say the decision is more about a scheme to get state aid for students who leave and is not in students’ best academic interests.

When the Legislature redesigned the school finance formula, it was changed to set funding based on the prior year’s attendance because school officials said it would make it easier to budget.   The district expects some students to go to another district rather than transfer to Sabetha schools in Prairie Hills, so a decision to close Wetmore next year would create a windfall for the district because it would get to keep the funding for students who transfer to another district.

Reportedly, only three teachers will be offered substitute positions in other schools within USD 113, which includes schools in Axtell and Sabetha.

The proposal to close Wetmore is a curious one, as Wetmore has higher proficiency levels on the state assessment test. 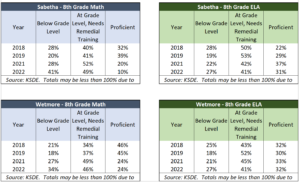 High school results are not available for Wetmore because of privacy concerns related to class size, but in 2021, 80% of Wetmore 10th-graders were proficient in math and 30% in ELA, compared to 30% and 22% in Sabetha.

So why would the board fire Wetmore staff, which is producing better results than Sabetha?

A review of the district’s audited financial statements shows Wetmore is not in financial difficulty.

Analyssa Noe, who has an MBA from the University of Chicago, presented a detailed financial report to board members last month in defense of Wetmore, including these findings:

Noe charges the district with a lack of transparency and accountability.

“This is my first time engaging in a local school board conflict, and I am deeply concerned by the lack of structure and oversight. These School Board members have a tremendous amount of power and control over local communities, but there don’t seem to be any clear standards or controls to confirm that these elected officials have the appropriate skills, expertise, or training to be making these kinds of decisions. We are doing everything we can to get the word out and defend the truth, but the public has limited recourse to hold the board accountable.

“We did a five-year look back on the district’s financials, and we can’t find any clear financial reasons to justify closing the Wetmore school system. We have asked the Board to address these questions directly, but we have not been given a clear response. It leads one to believe that there is something larger at play here, but we have more questions than answers at this point.”

Andrea Lagos is a Wetmore alumna and resident and believes the school should remain open.

“Wetmore has been providing a quality education to the children of our community for decades. The small class sizes, dedication of our teachers, and opportunities for our students to participate in extra-curricular activities provide a well-rounded education that is difficult to find in larger schools. We should be investing in more schools like Wetmore, not shutting them down.”

Representing WAC on the Prairie Hills School Board is Anissa Bloom, who is a “No” vote on closure.

“Small schools in Kansas allow emphasis to be spent on academics and social development. With smaller class sizes, students are able to receive individualized instruction with more chances for questions to be answered and time spent on one-on-one instruction.”

The Sentinel has posed a series of questions to the superintendent and the school board president.  Their responses will be covered in a follow-up story ahead of the December 12 meeting.

The meeting is scheduled for 6:00 PM in Sabetha.

*Editor’s Note: This story was corrected to reflect the December 12th meeting will not include a vote to close Wetmore.