Internet service providers say rural broadband is prohibitively expensive to install fiber or cable internet down the “last mile,” from a node when there are too few customers to support the service.  But David Frankland, of economic development firm EnterpriseKC, doesn’t buy that argument.

“It’s very reasonable if you’re looking at current existing technology,” he said in a phone interview. “But you also have to remember, you know, cable companies and phone companies and wireless companies aren’t necessarily interested in letting somebody else come into their turf.

“My argument is, let’s look at technologies that give us the ability to do something different, and to treat it like a sacred resource.”

Frankland is a proponent of “edge computing” or a system, in this case, in which — instead of laying fiber to a home that may be the only one on that road — a wireless system is hooked to the main internet line, commonly called a “backbone.”

“We always claim the last mile is expensive,” he said in a phone interview. We need to have a box, much like we have a cable box in our house, that connects wirelessly to a fiber backbone. “It’s workable, it’s doable, it’s being done today.”

Frankland pointed to Nevada-based Practechal Solutions, which has deployed just such solutions in several locations, including an apartment building in Chicago, the NEMA building, admittedly a luxury high rise. However, according to Frankland, Practechal also deployed a similar system in Africa, taking unused capacity on existing networks and spreading it out wirelessly to provide access to thousands of people in a 75 kilometer — or almost 47-mile area.

Of course in situations like this, it always comes down to money and politics. Kansas has as much as $1.1 billion in federal funding that could be used — in part — for increasing access to broadband. But with Democrat governor Laura Kelly and the Republican-controlled legislature not wanting each other to have a political ‘win,’ it becomes less likely that much will be done. It also is not in the financial interest of companies like AT&T and Centurylink that supply broadband, to advocate for systems like Prachtechal’s — or to invest in “outside the box” solutions.  Telephone and cable companies have a sizeable presence in the state capitol and they also write campaign checks.

“We need to be thinking outside the box,” Frankland said.  “We need to be collaborating, not worrying about political winds, and just do what’s right for the citizens of Kansas.

“We’ve got to make that available. We’re creating a huge disadvantage for a large swath of the population

Internet — and particularly broadband, defined as speeds of 25 megabits per second — was once something of a luxury, but in 2021 it is nearly impossible to function without connectivity.

In Kansas alone, according to BROADBANDNOW.com. approximately 173,000 people have no wired access at their homes at all, and another 307,000 do not have access to broadband. 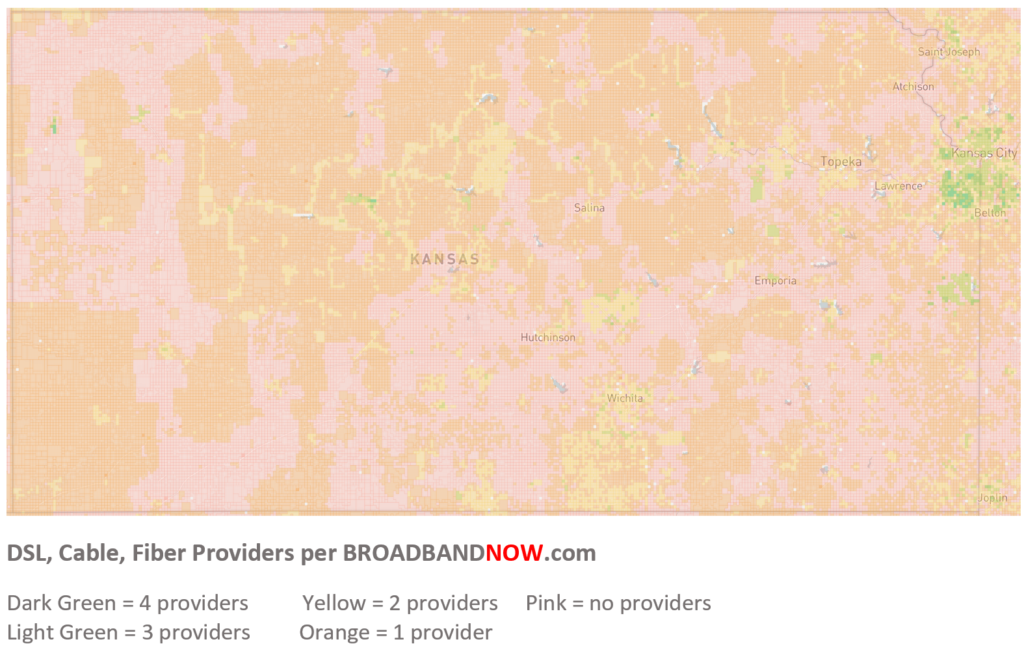 Moreover, despite there being 226 wired internet providers in the state, many communities have only one choice for internet service.

Nationwide, according to a report by the Federal Communications Commission, 19 million people — or 6 percent of the population — lack access to broadband and, of those 14.5 million, about a quarter of the rural population lack access — and more than a quarter-million Americans are still using dial-up.

According to BROADBANDNOW.com, 27 counties in Kansas have less than 75% broadband access.

These results are repeated across the country in states with large rural populations.

Additionally, a report by the Kansas Health Institute notes:

Kansas, in the last 10 years, has received — at the state level — nearly $6.4 million in federal grants to expand access, with little in the way of appreciable increase.