As the central initiative of her tenure in the White House, First Lady Michelle Obama preached about putting an end to “food deserts,” a phrase she popularized in her healthy eating campaign. According to Mrs. Obama, roughly 23.5 million Americans lived in food deserts.

It did not take long for managers at the new and highly subsidized Sun Fresh Market on Kansas City’s east side to understand how food deserts become food deserts. Within days of its opening they felt compelled to post a sign reading, “No Backpacks, No Strollers, No Bags or Diaper Bags.” 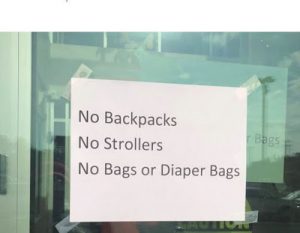 As reported in Tony’s Kansas City, “A cadre of women shoving merch[andise] into their bags hand over fist caused panic among workers and so the new policy was enacted. Bad to worse: Some witnesses report the women were selling the stolen items back to potential customers in the parking lot.”

Needless to say, this sign did not sit well with local shoppers who do not shoplift. “So if I’m a mother and came to the store with my child, I have to carry them. If I had to walk to the store with my baby, I can’t bring the diaper bag,” said one. Said another, “Family unfriendly . . . In addition to the profiling of 95% of the residents who will frequent the store.”

As the Sentinel reported last July, the City of Kansas City, Missouri, plunged into the retail grocery business by investing $950,000 to buy a chunk of the failing Linwood Shopping Center that it could have probably just repossessed.

That was just the beginning. The new Sun Fresh has and will require considerably more city support including $105,000 for public art, a perfectly absurd capstone for a spectacularly ill-conceived project.

“Direct development business isn’t something the city is used to doing,” City Manager Troy Schulte told KCUR radio at the time of the purchase. “We had to break some rules and make new rules as we went forward.” Had Schulte bothered to look backwards he might have noticed how many rules have already been broken to humor the opportunists who are profiting from this venture.

A few years back a blogger archived the history of the Linwood site and its primary champion, Don Maxwell, as reported in the Kansas City Star. It’s an enlightening read.

In January 1991, the Kansas City Star described Maxwell, the president of Community Development Corp., (CDC) as the “developer of the highly successful Linwood Shopping Center at Linwood Boulevard and Prospect Avenue.” Some $5.5 million in public dollars had been invested in that “success.” Maxwell had big plans that would “transform” the inner city.

By December 1992, the Star’s Yael Abouhalkah was chastising Maxwell for his “outrageous” failure to pay back the money another of his public corporations had borrowed. Here the reader learned that the Linwood Shopping Center was not generating enough revenue to pay back its developers’ loans.

In March 1993, the Star reported that the city was giving Maxwell money to “ease a cash-flow bind” at the Linwood site.

In March 1996, the Star reported that Maxwell and his wife “were being pursued by the government for more than $500,000 in defaulted SBA loans.”

In April 2001, the Star reported that Maxwell “admitted in federal court that he accepted a $1,400 kickback,” this time on still another publicly funded operation.

KCUR described Maxwell recently as a man who “used to own the property and still manages it on behalf of the city.“ Said Maxwell, “It’s a ghetto. We’re getting ready to turn it into a gold mine.” There is no “getting ready” about it. Maxwell has been mining that site for the last thirty years.

Like all mines, this one too will likely play out at least until some future generation of Democratic leaders with big ideas and short memories will sink another bundle of other people’s money into the food desert Democratic policies have helped create.