GARNETT, Kan. — Suggestions of more government spending topped the menu at a rural prosperity listening tour stop hosted by Lt. Gov. Lynn Rogers in Anderson County. Monday’s stop marked the seventh in a series of listening sessions designed to learn about and address challenges and opportunities in rural Kansas.

On Monday night, guests were broken into small groups where they were asked to define prosperity, name things their communities are doing well to encourage it, and to list barriers to growth.

“We want to be forward-thinking,” Rogers told attendees prior to the audience of 70-plus splitting into small groups. “We want to do this in a very nonpartisan way.”

Moderators in each group helped direct the conversations to what appeared to be pre-determined outcomes. A suggestion that limited job opportunities created brain drain, often turned into a lack of “living wage” jobs. Concern about high property taxes was listed as a “small tax base,” and a desire for good schools turned into a need to “attract good teachers.”

One group defined prosperity as a lack of poverty with good access to healthcare and childcare. Another group gave accolades to the community’s commitment to youth activities, building new schools and improving the local hospital. A third group listed a lack of livable wage jobs, affordable healthcare and the ability to attract good teachers as barriers to growth.

“The governor and I recognize the needs of our rural communities are unique and there is no one-size-fits-all approach,” Rogers said in a press release announcing the tour. “We must look at a variety of multifaceted policies and programs that will empower local leaders by helping them access the resources they need.”

The tour is focused on seven areas:

Eliminating government red tape and lowering tax rates didn’t make the list, but residents weren’t given the facts that might have made those barriers more apparent.  The organizers’ focus seems more on directing residents to create a ‘wishlist’ of government spending programs.

Government spending programs and subsidies have commonly been used to assist rural communities but with limited success. More than two-thirds of Kansas counties have lost population since 1997, according to U.S. Census Bureau data gathered by the Kansas Policy Institute. (KPI owns The Sentinel.) Anderson County, home to Garnett, isn’t immune to the damage. Since 1997, the county lost 2.8 percent of its population. Since 1977, the county lost 10 percent of its residents. 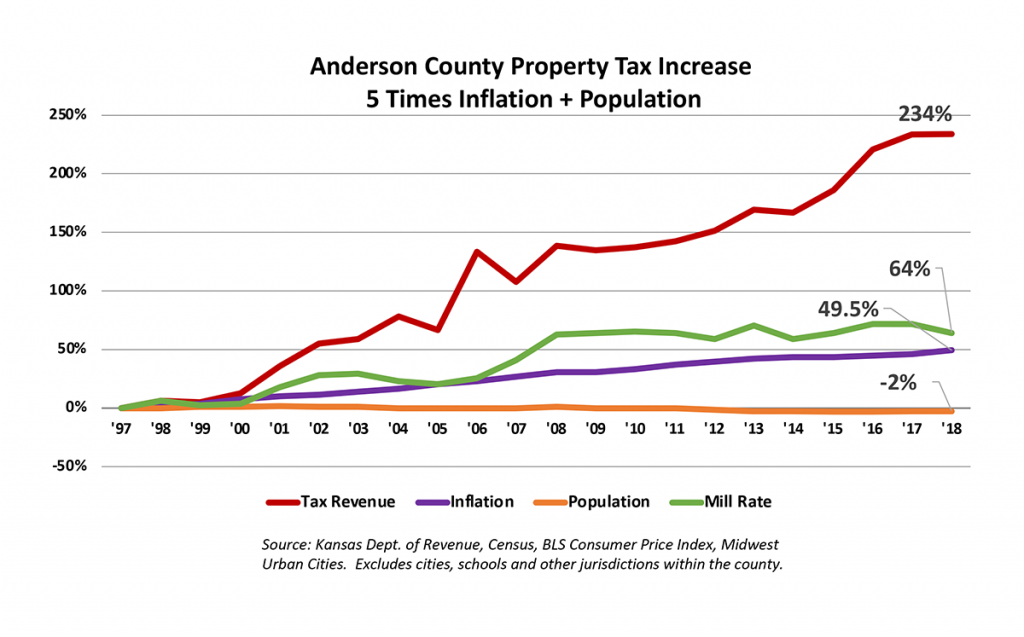 A week before the Lt. Governor’s arrival in Garnett, Dane Hicks, publisher of the Anderson County Review, penned a column asking how rural counties can escape “spending mandates required by a society which more and more has to be taken care of.”

Lawmakers implemented the largest tax hikes in state history every year for the past three years, including a tax increase caused by legislators in 2017 and 2018, and this year Governor Kelley vetoed a bill that would have returned a federal tax reform windfall to the individuals and businesses that earned it.

“Rogers should hear our refrain that part of the problem with rural growth is government, and the less of it the better,” Hicks wrote.

Listening is the first part of the process for meeting rural Kansas challenges, according to Rogers. He said that’s something he learned on the campaign trail.

“People felt like Topeka just didn’t listen to them,” he said. “People within a block of the Capitol would probably say the same thing.”