According to Kansas State Senator David Haley, the KCC recommends surcharges for things such as Payments in Lieu of Taxes, stormwater management, or wastewater management amount to no more than 15% of a consumer’s bill. However, customers of the publicly-owned BPU often see surcharges as much as 50 percent of their bill. 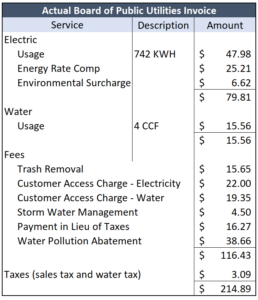 The Sentinel examined a customer invoice which shows fees and customer access charges exceeded the cost of electricity and water usage.  The fees referenced in the KCC surcharge recommendation totaled $59.43 and the customer was also charged $41.35 for ‘customer access’ charges.  Rate-based charges for water and electric totaled $95.37, there was a $15.65 charge for trash collection, and taxes were $3.09.  The total bill was $214.89

Unfortunately for BPU customers, the KCC — which regulates all investor-owned utilities in Kansas — has no authority to regulate the BPU.

“The theory is that if one can vote to have a voice or a stake at the table as to how the necessity of electricity and water usage is regulated and that that voice is directly responsible to the voting population, then the state should not have a role or any oversight,” Haley said. “In theory, it should work that way; in Kansas City, Kansas it does not work that way.”

“… the utility company — and we can theorize or suspect as to why — has become more of a tool, or the board has, for special interests and entities that are more interested in the bottom line, or sometimes their own personal bottom line … and less about the even-handed application of charges, fees or expenses. “

Haley noted that the BPU system can work, and does in other communities in Kansas such as McPherson where electric rates are substantially lower than in KCK, and said he’s not against the publicly-owned utility system as a whole.

“I’m against the mismanagement that results from special interests trickling down through a management system that gouges the consumer ratepayer and makes it difficult to sustain the quality of life, especially for average and low-income people who are struggling,” he said.

Investor-owned utilities have a cap on surcharges, and they must also petition the KCC for permission to raise rates.

An investor-owned utility that wishes to make a rate increase must first file a case with the KCC explaining why the increase is required, inform the consumers of the prospective increase and the KCC must then hold public hearings prior to making a determination on any increase. Additionally, any consumer with a problem with their utility has recourse to the KCC if the utility does not resolve the complaint.

Publicly-owned utilities have no such oversight, and consumers have recourse only to the six-person elected board of directors — not the State of Kansas.

According to Haley, 13 years ago a bill was first introduced by former State Senator Chris Steineger to bring publicly-owned utilities under the KCC, and it passed unanimously in the Senate.

“And then the BPU sent their henchmen, otherwise known as lobbyists, to the house where it was defeated,” Haley said.

For the last three years, Haley has introduced similar legislation to curb what he terms “abuses,” as well — but has struggled to get so much as a hearing.

“During the 2020 Session, I introduced Senate Bill 442 (requiring the KS Corporation Commission to provide info to BPU customers) and Senate Bill 448 (limiting the amount of non-consumption charges on a BPU bill),” Haley said in an email. “Both designed to protect the consumers of KCK BPU from these continuing systematic abuses.”

Both bills died in committee.

But, Haley said, Kansas Rep. Sean Tarwater (R-Stillwater) has expressed some interest in working with him on the legislation.

Regardless, Haley said he intends to continue to press for reform

“Though practically alone,” he said. “I hope to return in 2021 to continue this fight.”