Facebook policies say pages that “repeatedly publish or share misleading content” will see reduced distribution and be banned from monetizing or advertising on the platform, but Moriah Day, KSRA-PAC Chair, says the organization has not ‘repeatedly’ violated any of Facebook’s policies. 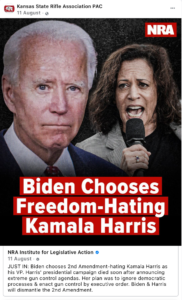 The text of the post reads, “Harris’ presidential campaign died soon after announcing extreme gun control agendas. Her plan was to ignore democratic processes and enact gun control by executive order. Biden and Harris will dismantle the 2nd Amendment.”

NRA-ILA shared the original post, but they are not banned from advertising. However, Facebook lowered the NRA’s truthfulness rating.

Day discovered KSRA-PAC’s ban when he logged onto purchase digital political ads in support of Kansas legislative candidates. Day didn’t receive prior notification nor does there appear to be a process to dispute the ban. He also can’t dispute the “false” label attached to the August 11 post, because only a post’s originator can dispute a fact-check.

“Big tech companies have rarely been friendly to conservative-leaning organizations. In fact, many Americans have simply come to accept that social media companies stifle free speech,” Day said. “But Facebook’s decision to ban a pro-2nd Amendment political organization from running political ads on its page in the days leading up to a major election is unacceptable.”

Earlier this month, Facebook suspended the advertising privileges of Choose Life Marketing, a Missouri advertising agency partnering with crisis pregnancy centers. Facebook told the marketing agency it would be weeks before it could provide an explanation. Facebook also rejected ads from the Susan B. Anthony List — one of the nation’s most prominent pro-life groups.

“All of this, no doubt, is a part of an increasingly troubling pattern: it has become abundantly clear that Facebook is targeting voices that dissent from the national media’s progressive consensus,” Hawley wrote.

KSRA-PAC will likely be unable to advertise on Facebook between now and the Nov. 3 election. The ban is for an indefinite period of time.

“We’ve seen CEOs and celebrities go out of their way to oppose President Trump and other conservatives in recent days. And they have every right to do as they wish with their personal money and influence,” Day said. “But unexplained censorship of an organization’s ability to share its political opinions through advertising is beyond outrageous.”