Most cities and counties in Kansas readily comply with the Kansas Open Records Act, but Kansas Policy Institute had to file a formal KORA complaint to get the Montgomery County payroll listing for 2020.

Montgomery County Clerk Charlotte Scott-Schmidt first tried to force KPI, which owns the Sentinel, to sign a “Certification of Use of Public Records” form as a condition of processing the KORA request.  But state law does not require citizens to sign forms designed by state or local officials. They can ask citizens to certify that employee names will not be sold to third parties for solicitation purposes, but a simple email confirmation is sufficient.

The county payroll listed was requested in an electronic Excel-compatible format as allowed under Attorney General guidelines.  The Frequently Asked Questions section of the AG’s website says, “Computerized information can meet the definition of a public record and must be provided in the form requested if the public agency has the capability of producing it in that form.”

Scott-Schmidt eventually provided the Excel file, but it was password-protected so the data could not be copied and pasted for public display.  That’s one of the tactics employed by some government officials to keep information out of public view; the Gardner-Edgerton school district tried only providing printed information, but a KORA complaint with the county attorney forced them to comply with state law. 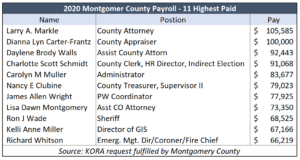 The other employees in the top ten were Assistant County Attorney Daylene Walls ($92,443), Charlotte Scott Schimdt is paid ($91,068) for being County Clerk, HR Director, and Indirect Election.  Nancy Clubine is paid $79,023 as County Treasurer and Supervisor II, Administrator Carolyn Muller is paid $83,677.

Montgomery County spent $7.8 million on total pay last year, including about $119,000 in overtime.