One family in Kansas City has had three generations find their way to higher education, thanks to KC Scholars, an innovative program from the Kauffman Foundation. 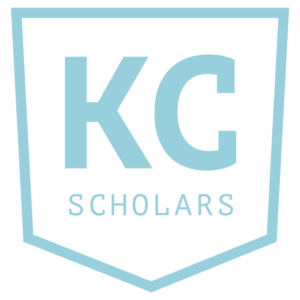 Tia Johnson, her mother Betty Johnson, and daughter Payton Johnson all took advantage of the KC Scholars program — which awarded its first scholarships in 2016 — to move forward with their education.

The first year the program — which is an evolution of previous Kauffman Foundation programs — was available, Payton was a junior and applied for the scholarship, as did her mother.

Tia said her mother heard about the opportunity at a community meeting and immediately called them when she got home.

“She was really excited,” Tia said. “She called us on the phone, and she said, ‘I went to this meeting, and they were saying all these things … and they’re going to offer scholarships to 11th graders, ninth 11th graders, and adult learners over 24 years. Oh, you guys. You and Peyton should do it!'”

Tia said she’d always had a goal to return to school — and had gone to college right after high school on a Kauffman scholarship as part of a previous program called “project choice.”

However, high school hadn’t really prepared Tia for what she would face at the collegiate level.

“I was a Project Choice kid from the eighth grade, so I knew that I would go to college,” she said. “Or at least I thought that that was my journey, but once I got there, it was just … not heavily supported. I didn’t really understand, you know, from classes to … the financial aid portions of it. I really didn’t have anybody in my school as far as counselors that really held our hand and tried to help us get there because I was a first-generation student. There was just a lot we didn’t know.”

Life happens, and Tia married early and put college aside, but when the opportunity presented itself, she said she nearly let it pass by. She had done most of the application but lacked two essays that would be required.

That’s when Betty stepped in.

Tia forgot to tell Payton that there was an adult portion, and on the very day the application process was to close, Betty told Payton, “You know your mother, there’s an adult component to this, and your mother should be applying for the scholarship right?”

Tia said she feared it would only be awarded to one person per household and didn’t want to torpedo her daughter’s chances.

Payton, however, was having none of it.

Upon finding out that all that was left was the essays for her mother’s application, Payton ensured it got done.

“We looked it up online,” Tia said. “I had green checks everywhere but two essays, and Payton just really pushed me — like we flipped roles — and she said ‘no, you’re gonna do this, mom, hurry up. You’re a good writer, write your story, and I’ll edit it, so I wrote one story … just my life story and gave it to her to edit while I was finishing the second essay, and I got it in at literally the 11th hour — like at eleven-fifty-something.”

Tia said she wasn’t really prepared by the public school system for what she found when she hit college, and Betty agreed.

Tia said in the 1970s when she was in school, she had some excellent teachers, but things like study skills she had to relearn — mostly from YouTube videos.

For Betty, it was somewhat more daunting.

She had taken a college preparatory program while going to school in the inner city but wasn’t at all prepared for what she found.

“I had a really good GPA,” she said. “I thought the same success I had in high school would just be easily transferred to college — and it wasn’t.

“When I got to college, it was really like night and day, like nothing I had ever seen. Everything felt foreign to me. A lot of the language that I heard … it just seemed like the students there had seen it before, experienced it before … so it wasn’t their first time. Right. And I just felt really lost.”

For Payton, the experience has been somewhat different. Payton attended the Sumner Academy of Arts and Sciences, a more than century-old college preparatory magnet school originally for Black students in the Kansas City area.

“I felt like I did pretty well,” Payton said. “I had a really heavy workload in high school. So the transition to college wasn’t like a shock to me and a few of my peers, so I think we were just able to really capitalize on, you know, what they put us through in high school.

“At the time, it was like ‘all this work.’ But then getting to college, we were able to really see the benefits of that as well.”

KC Scholars is designed to benefit low-to-moderate-income families in the six counties of the Greater Kansas City area and provides traditional scholarships to high school Juniors for schools in the Kansas City area.

For the Traditional Scholarship program, students must have and maintain at least a 2.5 GPA and score at least a 16 on the ACT or 800 on the SAT. The award is up to $10,000 annually for five years, paid directly to any of the 17 partnered colleges and universities.

KC Scholars has also partnered with several support organizations to help students be successful once they are in college.

The organization also provides a college savings match program for high school freshmen, matching dollar-for-dollar up to $1,000 a year funds put into a 529 College Savings Account. Additionally, each of the 250 freshmen initially selected for the program, which began in 2021, may earn up to $400 in incentives by completing the minimum number of college-ready activities identified for each grade (9-12). College Match participants remain eligible for the traditional scholarship their sophomore year but must maintain a 2.5 GPA to remain in the program.

The Adult Learner scholarship is available to high school graduates or those with G.E.D.s, 18 or older, in the KC Metro, who have not previously earned a bachelor’s degree and not been previously awarded a KC Scholars scholarship, and not be currently enrolled in a KC talent Network Credential program.

The Adult Learner program is worth a maximum of $5,000 annually for up to five years.