Kansas falls from the 17th most free place in North America to the #20 slot, finds the Economic Freedom of North America report released today by the Fraser Institute, an independent, non-partisan Canadian public policy think-tank.

The Sunshine State recorded its worst ranking since 2013 when it was the 9th most free in North America.  While Kansas has been on a steady decline in economic freedom, some states are improving. 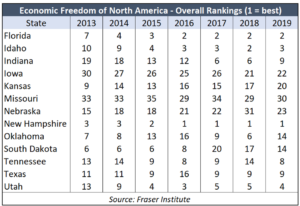 Economic freedom—the ability of individuals to make their own economic decisions about what to buy, where to work, and whether to start a business—is fundamental to prosperity.

“When governments allow markets to decide what’s produced, how it’s produced and how much is produced, citizens enjoy greater levels of economic freedom,” said Fred McMahon, the Dr. Michael A. Walker Research Chair in Economic Freedom at the Fraser Institute and co-author of this year’s Economic Freedom of North America report, which measures government spending, taxation and labor market restrictions using data from 2019, the latest year of available comparable data.

Fraser’s 2021 Economic Freedom of the World report shows people in the top quartile of the most free nations have almost twice the per-capita income of those in the second quartile ($50,619 vs. $25,416).  The economic benefits are universal across all income levels.

And the benefits go far beyond income.

Barriers to economic freedom in Kansas

A high tax burden is the greatest barrier to economic freedom in Kansas.

Regulations deprive many Kansans of the right to earn a living.  Occupational licensing restrictions that restrict competition in medical professions, personal services, and other industry sectors must be removed.  Failure to conform state law with the U.S. Supreme Court ruling in Janus v. AFSCME also forces some teachers and other public employees to pay union dues against their will.