With a budget this year of $7.3 million and just 60 full-time equivalent (FTE) students, K-State Olathe Innovation Campus will spend over $122,000 per student. 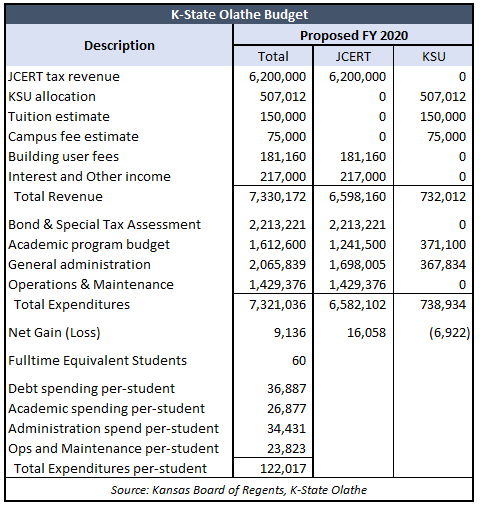 Proposed operations and maintenance come to $23,823 per student and debt spending per student will be $36,887.

Most of the K-State Olathe budget – about $6.6 million – comes from the Johnson County Education Research Triangle (JCERT) sales tax; the rest is provided by Kansas State University.

The K-State Olathe website lists 15 on-campus and 24 visiting faculty members, along with 26 staff members.  A search is underway to replace retired CEO and Dean, Ralph Richardson, who was paid $283,105 last year.

Christine Splichal, Director of Communications and Marketing, says many students are part-time and headcount enrollment is estimated at 120.  She also notes that activities on campus include for-credit academic programming, professional development, K-12 outreach, applied research and engagement with industry.

We asked Splichal why administration costs were so high and whether residents are getting a good return on investment, given that Johnson County residents already pay a higher sales-tax burden than residents of New York City.  Attempts by phone and via email to reach Splichal for further comment were unsuccessful.

Lack of transparency on JCERT

Questions remain about the cost/benefit of the JCERT tax, which advocates promised would deliver $1.4 billion in economic impact over its first two decades and significantly expand higher education degrees.

Voters approved the 1/8 cent ($0.125) sales tax in 2008 for JCERT, and at least one economist finds the goals noted above unrealistic. Ted Bolema, an economics professor at Wichita State University, told The Sentinel in an October story that he doubts the taxing authority’s ability to create $1.4 billion in benefits in 20 years.

“That would be impressive,” he said at the time. “By my calculation that would be a 14.2 percent rate of return, which far exceeds what almost any professional fund manager will do in the stock and bond markets over the same 20-year time period. If they really can do that, I’d like to put them in charge of my investments as well as the pension funds for the state of Kansas.”