Instead of turning over raw data and emails related to a Johnson County Department of Health and Environment chart, county officials are slow-rolling records requests. Spring Hill School Board member Ali Seeling requested emails related to how a COVID graphic leaked to the media and social media before the county published it. The Sentinel requested the raw data used to create the chart.

“We need additional time to respond to your request,” Dunham said in an email. “We will respond on or before Friday, Oct. 1, 2021.”

The county obviously doesn’t need time to produce the data; it already exists in the spreadsheet used to create the chart.  County officials don’t want to release the data because it would show how they consciously produced a very misleading picture to punish the Spring Hill school district.

Controversy surrounds the chart, which showed a skyrocketing weekly COVID incidence rate among Spring Hill students compared to other districts in the county. The graphic, provided by the Johnson County Health Department to county commissioners and the media, is politically-driven, Seeling says.

“The graph is designed to look alarming,” she said. “It wasn’t complete, and it was politically shared and politically driven to be a public slap on the hand to Spring Hill.”

The chart shows the weekly incidence rate per 1,000 students for Johnson County schools. It shows the Spring Hill School District with a rate of more than 15 students per 1,000 incidence rate. While other districts hover below four. Seeling says the data is misleading and leaked to the press to try to make an example of USD 230.

She believes the health department singled out the Spring Hill School District, due to school officials’ decision to enforce a county health department recommendation differently than other schools. The Johnson County Board of Commissioners adopted a mask mandate for students in grades K-6. Spring Hill officials instituted the mandate for its elementary and middle schools but allowed parents the ability to exempt their own kids from it. Approximately 17% of parents exempted their kids from the mandate.

Spring Hill officials received the graph on Friday from the Johnson County Health Department. They responded with a series of questions because it appeared the graphic didn’t tell the whole story.

“One of the biggest questions is why does this graph contain K-12 when your mask mandate is K-6?” Seeling said. 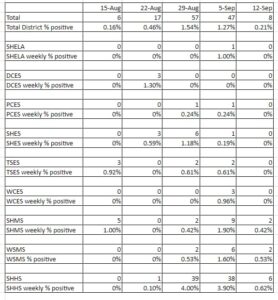 The adjacent table provided by the Spring Hill district shows most of the case jump during the weeks of August 29 and September 5 was in the high school.  For example, there were 40 more cases for the August 29 week compared to the previous week, with 38 of them being in the high school.

That is a critical distinction because high schools are not included in the county’s mask mandate recommendation, but county officials blamed the school board’s decision to allow elementary students to opt out of the mask mandate. An honest examination of the district’s policy for elementary and middle schools therefore cannot include the high school data.

Health officials admitted to the district that the information is incomplete, and it lumps the high school in with the elementary and middle schools.

A mere few hours after Spring Hill officials received the graphic, the Chair of the Johnson County Democratic Party, Deann Mitchell, started circulating it on social media. The post contained a picture of the graphic and comment from Mitchell: “Data from the BOCC (board of county commissioners). Should be on the dashboard this afternoon. KDHE lists cluster at Spring Hill High School.”

To date, the graphic doesn’t appear on the county health department’s website, but the state’s website lists a cluster at SHHS of six high school students on September 8.

Meanwhile, school district officials received media inquiries from the Kansas City Star, informing them that they will be publishing the graphic. The county health department told the school they didn’t know how the Star received the information. Other Democratic officials shared the graphic before the Star article made print.

Kansas City Star leaves information out of its story

The article “Johnson County school district with weak COVID rules is warned it has worst case rate” left important information on the cutting room floor, according to Seeling. District officials responded to the Star via email. Officials told the newspaper that, unlike other Johnson County schools, the health department hasn’t recommended closing any of Spring Hill’s classrooms or schools.

“Olathe has had at least three (classrooms) and Gardner a whole middle school,” Seeling said. “And Olathe is 100% masked. They left that out.”

The graphic and the press leak reveal that the COVID response in Kansas and Johnson County is political, she said.

If Gardner’s numbers are as low as the graphic shows, why are so many kids in that district quarantined and losing education time, she asks in a Facebook post. “Why are parents losing jobs to take off work for another round of quarantine?” She wonders if county health officials shared the graphic with the press to drive a political narrative.

Hopeful data, she said, is rarely shared by the press, but Seeling’s Facebook post reveals plenty of hope. For instance, she notes that the 135 positive tests in the Spring Hill district do not represent moderately ill or severely ill students.

“No one wants to think that our children are being politicized, but then again, the only place the county is concerned is when they are at school,” Seeling said. “Not at indoor birthday parties, indoor sports, concerts, 70,000-plus Chiefs games.”

The Star story reports that Spring Hill officials do not have plans to change COVID-mitigation policies. Seeling says she will continue to advocate for data-driven policies.

“I’m not going to make fear-based decisions,” she said. “I am not going to jeopardize kids’ education or a family’s income based on what the media is saying. It’s not going to happen.”