Right-to-Work provisions in the Kansas constitution give workers the right to decide whether to join a union and pay dues, but a Johnson County legislator wants to make union membership mandatory.  HCR 5008 is sponsored by Democrat Jarrod Ousley of Merriam. Ousley did not respond to requests for comment on his proposed constitutional amendment.

According to the resolution it would repeal section 12 article 15 of the Kansas Constitution which provides, “that no person shall be denied employment because of membership or non-membership in any labor organization.” If passed Kansas would cease to be a right-to- work state. Wichita City Councilperson Brandon Johnson, District 1, says this would be better for Wichita workers, because it would allow more protection for workers.

“More employee rights; it would make that stronger,” says Johnson. “I know people who have been fired with no legal recourse, because this is a right-to-work state.”

Government is the largest union sector in Kansas, which already has a nearly 40% of employees in unions. Indeed, two of the largest sectors with union employees are the protective services sector, i.e. first responders, police, fire, etc., and the education sector, such as teachers and librarians. United Teachers of Wichita did not respond to a request to comment on what impact HCR 5008 would have on membership.

The differences do not end there. According a 2018 study by NERA Economic Consultants, right-to-work states have higher growth in private sector GDP (38 percent vs. 29 percent), private sector jobs (27 percent vs. 15 percent) and personal income (39 percent vs. 26 percent) than forced union states.  The NERA study used data from the Bureau of Economic Analysis, covering the period 2001 through 2016. 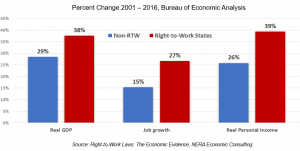 It is for reasons like this that Wichita City Councilperson Bryan Frye, District 5, believe Kansas needs to remain a right-to-work state.

“I would oppose,” says Frye.  “Kansas is a right-to-work state and should remain so.”

However, Johnson does not feel that requiring union membership in the state would be detrimental to businesses in his district.

“I don’t see being a negative impact on any business in our district,” says Johnson.

Right-to-work laws have gained attention in the region in recent years. In 2018 Missouri voters went to the polls and voted to remain a mandatory union state. An irony about labor unions is that only 6 percent of employees in unions actually voted to be in them. 94 percent of union members joined up when accepting a job that required membership.

Yet union membership makes it on ballots in large part due to the sheer volume of spending labor groups are willing to put into politics. In 2016 labor groups spent $1.6 billion dollars nationwide. For example in Missouri lawmakers passed the right-to-work law in 2017, but labor groups through a petition drive prevented the law from being enacted and put it on a state ballot. It was voted down, with labor coalitions spending $16.1 million dollars to oppose right-to-work down. Right-to-work groups mustered $3.2 million respectively.

Should HRC 5008 pass the legislature it would be put on a state-wide ballot for voters to approve or reject.