Autocracy is a system of government by one person with absolute power, and there were times in today’s Johnson County Commission meeting when Chairman Ed Eilert acted as though he could make up the rules at his discretion.

Agenda item #9 dealt with COVID reports and updates, including a letter signed by more than 20 city officials asking the county to impose enforceable regulations in place of the county’s new voluntary, unenforceable guidelines.  Governor Kelly rescinded statewide restrictions at midnight on May 26, leaving local officials to decide what, if any, restrictions should be enacted.  On the advice of county health officials, Johnson County issued a statement the next day saying it would not impose additional limits.

Eilert began a discussion about 2 hours and 33 minutes into the meeting video, suggesting that the County issue a new ‘Johnson County Plan’ including a reference to Phase 3 of the governor’s Ad Astra Plan, although he didn’t specify which version of Phase 3 he preferred; the original where pools and bars were allowed to open or the revised version where Governor Kelly kept them closed.  He said he intended for the new guidelines to be voluntary but several commissioners said they weren’t sure if that was the case, based on other comments from Eilert.

After considerable discussion, District 6 Commissioner Mike Brown made a motion that the county issue a simple statement confirming what health officials said.  The motion was seconded but Eilert wanted nothing of it.

Eilert then turned back to his own recommendation and the ensuing discussion was cumbersome and confusing.  Commissioner Allen made a motion to add Eilert’s suggestion to expand upon Brown’s motion, but commissioners Ashcraft, Brown, and Klika said the intent of Eilert’s suggestion wasn’t clear.  County Manager Penny Postoak Ferguson also said she was confused by the motion.

Commissioner Hanzlick said saying the guidelines were voluntary wasn’t strong enough.  She said residents and business owners need to know that commissioners have “expectations” that people will follow their instructions.

Brown said the paternalistic reference to ‘expectations’ wasn’t necessary, saying, “I have full faith in the citizens of our county to manage themselves. I was out yesterday and found people to be distancing themselves from each other.  The guidance you’re suggesting implies that citizens aren’t capable of managing themselves.”

Those watching the meeting online could see that Eilert wasn’t pleased, sitting back scowling with arms crossed.

Brown also said, “…a nanny-state is not required; we’re not their parents.”

Asked the goal of his suggestion, Eilert said, “It’s to encourage businesses to operate in a responsible manner.”  He insisted that his proposal was just voluntary, but he also said churches would be exempt because they have their own plan.  Many other employers also have their own plan, so why are some exempt from ‘voluntary guidelines’ and not others?

Commissioner Ashcraft noted that the advice from county health officers was a voluntary guidance plan.

“So are you asking us to just confirm or affirm the letter they sent out?  Or are you wanting us to do something different?”

Eilert said he wanted something more specific than the “general reference” made to following the state’s Ad Astra Plan, but to call it a Johnson County Plan to apply at least through June 11.   He also said having the statement come from the County Commission rather than the county health department “…puts it on a different level.”

Oddly, anyone looking at the statement on the county website might find that a distinction without a difference.  It’s entitled “Johnson County won’t impose additional limits, strongly recommends adherence to Ad Astra Plan.”

More than an hour into the discussion, Commissioner Klika expressed frustration with the lack of clarity and purpose.

“Mr. Chairman, this thing has turned into a zoo.  It’s time to take a step back.  We’ve empowered our medical folks to lead the way on this.  They’re leading the way.  It’s time to step away from it and stop confusing the general public.”

Allen’s motion was eventually adopted 4-3.  He joined commissioners Eilert, Fast, and Hanzlick in support; commissioners Ashcraft, Brown, and Klika opposed the amendment, saying they thought it only would lead to further confusion.

In the end, nothing changed for residents and business owners.  Johnson County still only has the voluntary, unenforceable recommendations in place that existed at the beginning of the day. 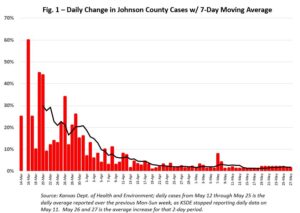