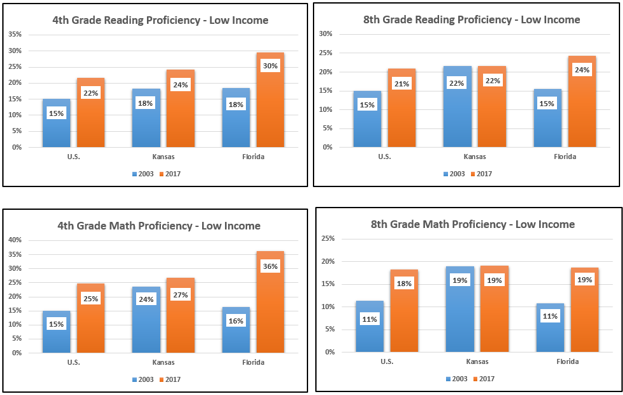 Florida spends about $1,159 less per-pupil than the Sunflower State. Kansas Policy Institute pointed out the difference in outcomes and spending between the two states in an April 18 blog post.

“Florida trailed the nation in the 1990s before implementing a variety of student-focused reforms, and now their public school performance is above the national average on seven of the eight proficiency measurements,” the post reads. “And they did it while always spending far less than the national average. Hopefully some judges, legislators and school board members will ‘go to school’ on the Florida approach.”

“Unfortunately for Florida, students do not graduate and go to college from fourth or eighth grade,” Tallman writes.

“A graduation rate means the district gave you a piece of paper. They promoted you,” Trabert says. “…Kansas is not turning out 86 percent highly-skilled, career and college ready high school graduates. West Virginia has a 90 percent graduation rate, but only 19 percent of students taking the ACT are considered college-ready in English, Reading, Math and Science compared to 29 percent for Kansas. Kansas also has higher NAEP scores than West Virginia. Graduation rates really aren’t a measure of academic achievement.”

KASB says 28 percent of Kansas ACT test takers were considered college-ready versus 21 percent of Florida students, but Trabert says Florida’s higher poverty level accounts for most of the difference.

“There are enormous learning gaps for certain demographics in all states; not because some kids can’t learn, but because they haven’t been given equal access to educational opportunities,” Trabert says.

ACT doesn’t provide income-based scores, but there are noticeable gaps among races, and students of color are about twice as likely to live in poverty. A slightly higher percentage of white children are college-ready in Kansas (35 percent vs 32 percent), but Hispanic kids in Florida do better than in Kansas (16 percent vs 14 percent). African American students do a bit better in Kansas than in Florida (6 percent versus 4 percent). However, Kansas is 65 percent white compared to Florida’s 39 percent, so the statewide averages of college-readiness appear larger simply because Florida has a larger mix of minority students.

And minority kids in Florida are seeing tremendous gains. Trabert says instead of cherry-picking data –Tallman’s post used data from 2012 to 2015– policymakers should examine long-term trends in improvement.

“KASB tries to claim that Florida’s funding has grown faster by using a specific 3-year window, but they don’t disclose that Florida had a large funding decline in 2012, while Kansas was practically flat. Florida’s short-term growth wasn’t real – it was just recovering from a sharp decline. But over the long term, Florida and Kansas have had identical growth in current spending per-pupil.”

Trabert’s comment refers to the 8.4 percent inflation-adjusted growth between 2003 and 2015 shown in this chart. 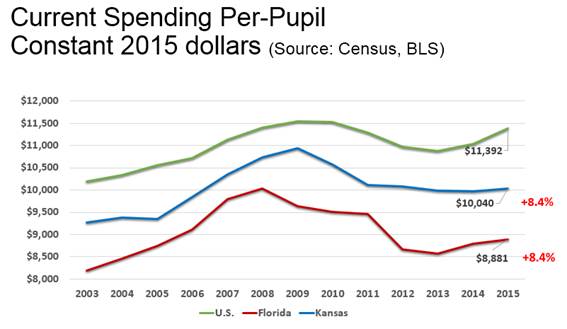 “Florida spends a great deal less on its students, and Florida has much stronger growth over time. The education lobby wants to make it all about money. That’s the big difference between Florida and Kansas,” Trabert says.

In 2003, Florida trailed the nation in NAEP proficiency. Its students tested below the national average in seven of eight measurements. That year, Kansas beat Florida in six of the eight metrics, tied once, and Florida beat Kansas in one measure.

He concludes Florida is seeing large gains, because state officials are focused on accountability and student outcomes instead of dollars spent.

“Florida is getting the long-term benefit for initiatives put in place 15-20  years ago,” Trabert says.

“If you can’t read by third grade, you can’t move to fourth grade,” Trabert says.

Kansas legislators and the education community rejected a similar proposal a few years ago.

As importantly, Florida has introduced more competition in its educational system. There are scholarship programs for low income and disabled kids to use for private schools and a robust charter school program. That doesn’t mean Kansas schools aren’t trying, but the amount of money they receive isn’t likely to pay dividends unless the legislature summons the backbone to hold schools accountable, according to Trabert.

“Florida took a student focused approach, and they’re reaping the rewards,” he says. “Kansas has been on the one-trick-pony-money focus, and it isn’t really going anywhere.”