Evergy, the largest for-profit electric company in Kansas, recently raised rates for nearly every customer in the state by more than 20% — without telling them.

Electric utilities in the region are permitted by regulatory authorities to use the Retail Energy Cost Adjustment, or RECA, to recover the cost of power generation fuel and the costs of purchasing power.

On July 1, 2022, Evergy Kansas Central increased its fuel and purchased power costs by 52%, from $0.028918 to $0.043956 per kilowatt hour, and neither the Kansas Corporation Commission — the entity tasked with regulating energy companies in the state — nor Evergy advised Kansas retail ratepayers of the change.

An expert analysis conducted by Brubaker and Associates — an expert energy consulting company in St. Louis, Missouri — and commissioned by the Kansas Industrial Consumers Group found that the increase in fuel cost, without factoring in the recent heatwave, would cause the average monthly electric bill for July, August, and September 2022, to increase, on average for residential customers by 22.69%; from 12.44 cents per kWh, to 15.263 cents per kWh and for commercial customers by 28.25%. That will affect about 95% of Evergy’s 716,000 customers who have a fuel adjustment clause.

Worse, according to Jim Zakoura of Kansas Industrial Consumers Group, the increase in fuel costs is not what Evergy actually spent but rather an estimate of what they think they might spend.

“When Evergy increased its fuel adjustment clause on July 1, 2022 — to reflect what Evergy estimated would be increased costs — the per unit cost for electric energy in Kansas increased materially,” Zakoura said. “Very predictably, the combination of the increased per-unit cost, and extended high temperatures and additional electric use, will lead to very high residential and commercial electric bills.”

Moreover, the most recent billing period for which customers will have bills ran from mid-June to mid-July, so August and September bills are likely to be higher yet.

Zakura also noted: “These increases will be greatly exacerbated by the weeks of very high temperatures. It would be expected that electric bills in July 2022 would increase more than 50% compared to a year ago.”

The chart below from a 2020 study shows Kansans paid the highest electric rates in the region by far, and that has since gotten worse. 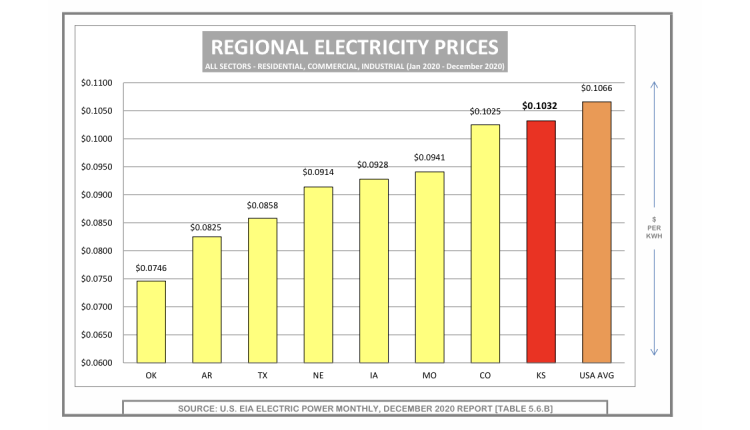 The KCC is expected next month to make a decision on a transmission project, which would cut a swath half a football field wide through five counties and 89 miles of Kansas countryside, taken from landowners by eminent domain, for a massive high voltage power line.  Adding insult to injury, Kansas ratepayers will foot the bill for the transmission line that will send electricity to other states.

If approved, the line would send electricity that was originally intended to serve the Wichita and Kansas City metro areas to customers in Missouri, but Kansas customers will have to pay for the transmission line via higher electricity rates.

All while already paying some of the highest electric rates in the country.

Additionally, KCC staff recently raised concerns about Evergy’s propensity to exceed its allowed capital expenditure budget — with the costs passed on to consumers in the form of higher electric rates.

“These trends are highly concerning to Staff. Evergy’s propensity over the last three years has been to increase its capital expenditure budgets higher and higher with every iteration. If this continues, we believe it will undermine the goal of achieving regionally competitive rates and reliable electric service, especially against the backdrop of general inflationary pressures being experienced throughout our economy.”

The Sentinel reached out to Evergy in an attempt to ask about the KCC staff concerns but received no response.