Eric Teetsel serves as the President of the Family Policy Alliance of Kansas, an organization dedicated to pro-family public policy. Here Teetsel answers the Sentinel’s 20 Questions.

I’ve had the political bug since I was just a kid. In high school, I was voted “Best

Republican” in a model U.S. Senate program for my portrayal of Jesse Helms. But it wasn’t until I was out of graduate school that I was exposed to any serious thinking about the relationship between faith and politics or public policy. (A sad commentary on Christian higher education, but that’s another subject for another day.) Michael Novak, the renowned Catholic theologian from the American Enterprise Institute, spoke at an event I attended on the themes of his seminal book The Spirit of Democratic Capitalism. It was one of those rare “aha!” moments for me when someone put into words my unformed thoughts and feelings. Later, in a total God move, I got a job building a program to help Christian college students think through the relationship between faith and the free enterprise system at the American Enterprise Institute.

I joined Marco Rubio’s presidential campaign team in November 2015 and served as his Director of Faith Outreach through the end of the campaign. Then I worked on Senator Moran’s re-election. I was truly privileged to spend 2016 working for two of the finest members of the Senate, but I’m glad to be done with campaign life.

That’s the first time I’ve seen it called “FPAK.” I’m going to use that!

In short, I believe that influencing public policy is one of the ways Christians fulfill their responsibility to seek the flourishing of the community in which they live and love their neighbor. Our laws are either going to encourage liberty and opportunity or detract from it; they are either going to be just or unjust. They are going to protect the weak, vulnerable, and marginalized or serve powerful, entrenched special interests. Politics may or may not be the most important way each of us do our job as Christians, but it’s one way.

Our mission is to protect and cherish life from beginning to end without regard for size, age, ability, color, sex or any other characteristic. Every life is invaluable because everyone is a unique creation of God. We believe God created the family as the first, most fundamental unit of society for a reason – because it’s the most important. Therefore, we seek laws that uphold and honor the role of marriage and family. Finally, we understand religious freedom to be the foundation of American civil liberties. Everyone should be free to believe and live as they see fit.

There’s no typical day, unless you count the time I spend at Blackdog Coffeehouse in Lenexa. That’s a non-negotiable.

The ongoing battle to defend the rights of the unborn is the social justice issue of our generation. Someday, our descendants will look back and wonder in horror how we allowed defenseless babies to be killed in utero. Nothing is more important.

There are, however, other issues that stem from America’s failure to understand the dignity of human life. In just the last few years, the movement to redefine sexual norms has expanded into territory that goes into deeper questions of human identity. Many Americans can no longer tell you what it means to be male or female. This is stunning, frightening, and not going away any time soon.

FPAK (I like it!) works closely with many important institutions doing policy work, like the Alliance Defending Freedom (ADF) and Family Research Council (FRC). Our organization has roots with Focus on the Family and an ongoing positive relationship, but there is no longer any official connection there.

First, I would grant myself a few additional wishes.

Second, I would overhaul our system of public education. The current system is built to serve the interests of bureaucrats, union bosses, and lawyers; it’s supposed to serve our kids.

The education industrial complex says money is the problem, but no sphere of life has experienced less innovation or ingenuity in the last 60 years than public education. We still use a calendar designed so that kids could help bring in the crops. Because all teachers must be “certified” by the accreditation cartel, a NASA astronaut can’t teach high school physics without taking a semester of undergraduate education courses. Principals are barred from firing their ineffective teachers and giving raises to their best. Worst of all, the system fails to recognize that each child is a unique being endowed with their own gifts, interests, and goals. Instead, we expect every child to learn the same things at the same time in the same way. Our kids deserve so much more.

Third, I would change our judicial selection process. The current process works like you would expect a Communist oligarchy to function. Our judges are abusing their power by stepping outside their constitutionally limited authority and imposing their own personal politics. It is nothing less than a usurpation of the democratic process. We need a system that provides judges who adhere to the separation of powers and allow the legislature to make laws reflective of Kansans and their values.

I believe God created a universe of order. Just as there are laws of physics, the universe is endowed with natural laws. When societies align their ways of life with God’s created order they can expect to flourish; when the people reject God’s order calamity will ensue.

No issue illustrates this principle like marriage and the family. Pick an area of public policy, from education attainment to crime to employment to health, and you will find that research proves children who are raised in a home with their biological mother and father outperform those who are not. God created a system that begins with a man and woman becoming husband and wife then father and mother. Rooting ourselves in that order results in blessing; deviating from it is a curse.

I call myself a conservative because I believe that by conserving the patterns of life that conform to God’s created order we maximize freedom and opportunity for everyone.

Steve Brunk, FPAK Political Director, represented the organization with testimony before the legislature a number of times. We were honored to help pass Simon’s Law, a bill that preserves the right of parents to dictate decisions about their children’s health care in emergency situations, and an important update to the Women’s Right to Know Act, which ensured women seeking abortion have access to basic information about their provider. We also supported a resolution naming pornography a public health hazard, a bill promoting knowledge and access to palliative care, and more.

Each of those passed, so I guess we did okay.

I love meeting with people and talking about faith and the ways it changes how we think about and respond to the important issues of the day.

Raising money. By the way, your readers can learn more about FPAK and support our work by visiting familypolicyalliance.com/Kansas.

An approach to public policy grounded in Christian faith is never going to fit neatly into an earthly political paradigm. What the Bible provides is truth about human nature and a moral and ethical framework through which our thinking and decision making should be filtered. We find agreement with political organizations only to the extent their platform aligns with those truths and principles. This never happens 100 percent of the time and it often leads to co-belligerence with strange bedfellows.

For example, this year the Family Policy Alliance co-authored an amicus brief with an organization called Women’s Liberation Front (WOLF) in a case before the Supreme Court called Gloucester that dealt with transgenderism. WOLF is a self-described “radical feminist” group devoted to unrestricted abortion, gay rights, and all that. FPAK disagrees with WOLF on 99.9 percent of the issues, but found common ground on this one thing: the meaningfulness of biological femininity. FPA and WOLF agree that being born a woman is an unchangeable reality that matters and that no man can claim to have a genuine female identity.

At about the same time we were working with WOLF I was told by a member of Republican leadership that 80 percent of the Kansas Republican caucus doesn’t want a hearing on our number one policy priority, the Student Privacy Act, that instructs schools to use biological sex not “gender identity” when determining policy for private facilities.

My parents’ last duty station was Fort Riley. When my dad retired after 29 years in the Army JAG Corps they moved to Shawnee. My sister and her husband went to K-State and then moved to Mission, so Kansas has long been “home.” While I was in Denver and D.C. my mom was praying I would “meet a nice girl from Kansas” and eventually move home. I did.

The Student Privacy Act I mentioned previously is our top policy priority for the session. We believe society has a duty to preserve the privacy and safety of young girls and boys at school, and the SPA accomplishes this while also providing helpful accommodations to students whose unique circumstances require one.

Because public policy is an important way we demonstrate love for our neighbors, my goal is to get Christians in Kansas engaged in the process to bring the laws of our great state more in line with what we know leads to greater human flourishing.

Marco Rubio not gaining the Republican nomination in 2016 is the biggest heartbreak. I was deployed in South Carolina during the debate in which Chris Christie attacked him and our chances in New Hampshire tumbled. Experiencing the enthusiasm for Marco in Iowa and South Carolina and thinking about just how close we came to winning still makes me wince.

Concern for the least among us, especially kids who are hungry, sick, lonely, ill-educated, targeted by all manner of predators.

There are no silver bullets in our broken and sinful world, but rebuilding a culture that honors and adheres to marriage and family properly understood is as close as it gets. Dad and mom are the bulwark against all sorts of evil.

They already know to read (Danedri) Herbert and (Jack) Cashill. What more is there?

SB 174 would eliminate ‘pay to work fee’ for APRNs 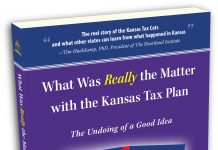