The City of Edgerton had a council member resign earlier this year over allegedly misleading residents about property tax increases.  The mill rate was lower than in prior years but property tax revenue jumped 80% over the previous ten years, indicating that the mill rate could be considerably lower. 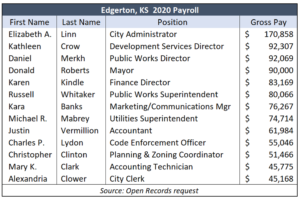 The population declined a bit since 2012 but spending in the 2022 budget is 226% higher, and part of the increase is in the city payroll.  An Open Records request submitted by The Sentinel’s owner, Kansas Policy Insitute, shows City Administrator Elizabeth Linn was paid more than $170,000 in 2020.

City Administrator Elizabeth Linn may be the highest paid in Kansas on a per-resident basis.  With a population of just 1,748, Linn’s pay works out to about $98 per resident. 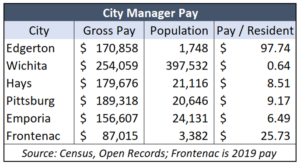 Frontenac, in southeastern Kansas, paid its administrator about $87,000 in 2019, or just $26 per resident.  Three cities with populations a little above 20,000 – Hays, Pittsburg, and Emporia – pay their city administrators between $6.49 per resident and $9.17 per resident.

Edgerton also pays its Public Works managers much more on a per resident basis.  Their top two managers were paid a total of about $172,000 compared to just $111,000 in Frontenac.

It is also highly unusual for a town the size of Edgerton to pay its mayor $90,000 and to have a Development Services Director and a Marketing Manager.

Tax and service charge revenue from companies at taxpayer-subsidized Logistics Park KC has been a boon for the City of Edgerton, but it seems that much of that revenue has been used to increase city spending.