The extension of stay-at-home orders in Johnson and Wyandotte counties are causing quite a bit of online backlash from business owners and out-of-work employees, and the lack of statutory guidance on how those decisions should be made is adding fuel to the fire.  With no objective criteria to guide these decisions, each health officer is left to their own devices.

With 504 confirmed COVID-19 cases in Johnson County as of May 4, only 0.08% of the more than 600,000 residents are infected.  Put differently, cases would have to be 12 times higher to reach just one percent of the population.  The infection rate in Wyandotte County is 0.53%; that’s more than Johnson County but still only about half of one percent.

State law allows unelected county health officers to issue stay-at-home orders in a public emergency based solely on their ‘medical opinion.’  No statistics are required, and there are no minimum thresholds to be met to justify their actions.  It’s a purely subjective decision based on each health officer’s medical opinion.

The daily rate of increase in new cases has been trending down consistently in Johnson County.  The 7-day moving average shown in Figure 1 is just 1.97%, down from 13% a month ago. 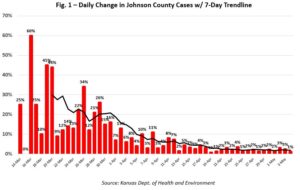 Johnson County officials feared that Kansas City, Missouri residents would bring COVID across the state line if they didn’t extend the stay-at-home-order, because the Kansas City mayor’s lockdown order runs through May 15.  But according to the Missouri Department of Health, the infection rate in Kansas City is just 0.13%; that’s not much more than in Johnson County.

The trend in Leavenworth County is on a slight increase recently and sits at almost 19%, but the public health officer there didn’t extend the governor’s stay-at-home order.  The Kansas Department of Health says the big spike on April 30 was due to delays in reporting from some communities more cases found at the Lansing Correctional Facility, but the moving average was still higher than Johnson County prior to that spike. 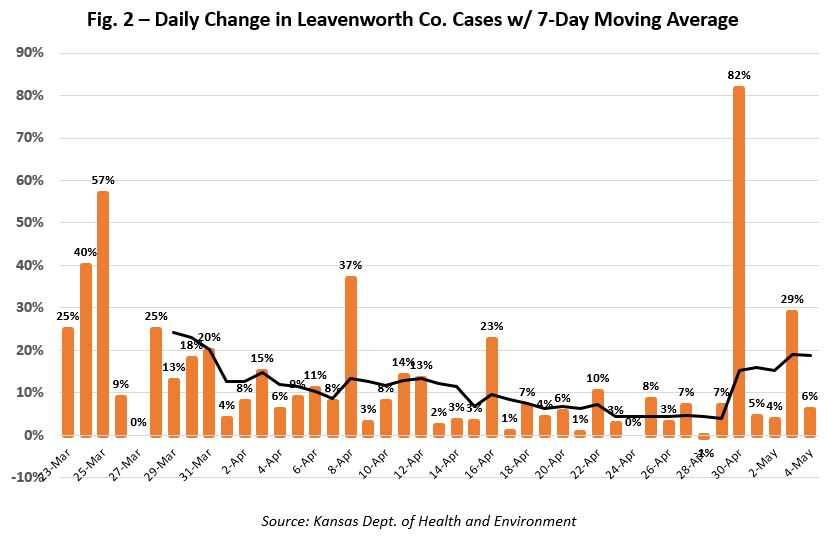 The Sentinel will ask experts to weigh in on these questions and report back.