The Kansas Department of Education released state assessment scores last week and the results weren’t good. They showed that only about a third of Kansas 10th graders who are aren’t considered low income kids are college and career ready in math and English. Almost two-thirds of Kansas students scored in the lowest two categories, which indicates those students need remedial training and are not on track to be college or career ready.

“There are some serious disappointments and there are some areas we should be proud of,” Watson told the Kansas State Board of Education last week. 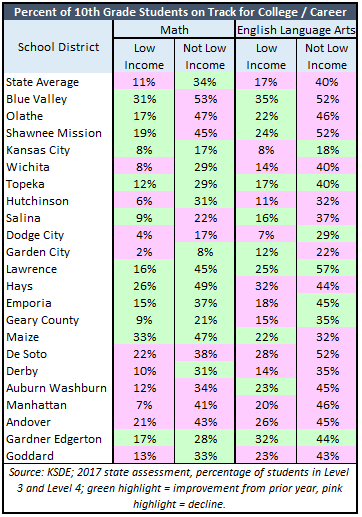 “The state average for 10th grade low income students is just 11 percent and a slight decline from 11.2 percent last year; 34.1 percent of those who aren’t low income are on track to be college and career ready in Math, which is a bit better than last year’s average of 33.6 percent. English Language Arts readiness for 10th graders declined for both groups; low income 10th graders declined from 17.8 percent to 16.5 percent and readiness for other students dropped from 42.3 percent to 39.8 percent,” the KPI post reads.

The post is attached to this status update: “Only 11 percent of low income 10th graders are on track to be college and career ready in math, and just 34 percent of those who aren’t low income, despite a nearly $2 billion funding increase since 2005. Just spend more isn’t the answer.”

The publishing of student scores drew ire from a former state representative, Gene Rardin. Rardin served in the Kansas House from 2007 to 2011.

When pressed for which facts were inaccurate, Rardin offered none. He wrote, “If you are trying to sell the idea that cutting education funding or diverting education funding to private, religious schools will produce positive outcomes and spend more money on education will not produce positive outcomes, I would call that disgustingly inaccurate, much like the idea that giving tax cuts to the richest people will trickle down, aka voodoo economics, to the middle class.”

The blog post doesn’t mention changing education funding at all; it just cites achievement facts from the Department of Education. Neither do the mainstream media stories on the topic. The Lawrence Journal-World, for instance, subtly suggests that stagnant scores are the result of changes in testing methods and to No Child Left Behind. The Journal-World only mentions that the Kansas Supreme Court will likely use test scores to determine whether new school finance formulas are constitutionally adequate.

The post Rardin calls “disgustingly inaccurate” doesn’t mention funding or financing at all. It lists assessment scores and breaks down some of the scores by district and family income level. For example, the post notes that the Blue Valley School District, of which Rardin used to represent portions of the district, boasts the highest percentage of low income students–35 percent–who are college and career ready in math.