A recent study from Cato Institute contradicts two common beliefs about the Kansas education system.  The authors of a 50-state analysis determined that, controlling for cost of living, spending more on schools doesn’t cause achievement to improve and Kansas schools are relatively inefficient compared to other states. 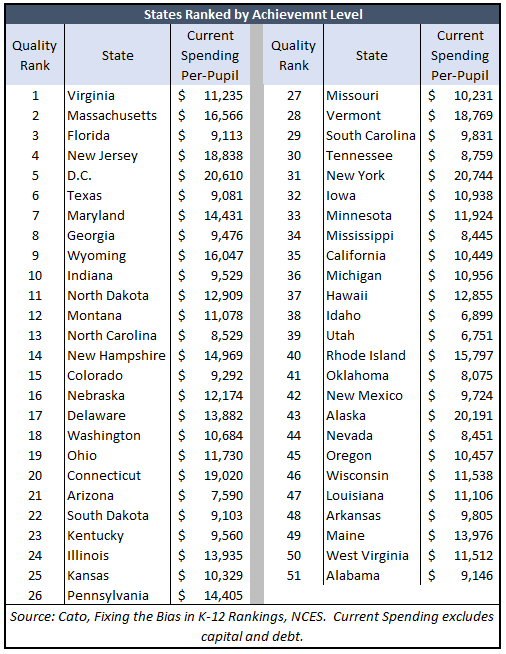 Entitled Fixing the Bias in Current State K–12 Education Rankings, the study says traditional rankings of average test scores produce misleading results by not accounting for learning gaps among various demographic groups.  For example, the authors say Iowa has higher average scores than Texas on Reading, Math and Science but Texas wins all but one of the 24 matchups when scores are disaggregated and compared by the four major racial components (white, black, Hispanic and Asian).  Virgina is ranked #1 in the Quality rankings of the study (not considered spending or cost of living).  The high-spending states of Massachusetts ($16,566 per-pupil) and New Jersey ($18,838) are still in the top five, but so are two states that spend much less – Florida ($9,113) and Virginia ($11,235).  Texas is ranked sixth at just $9,381 per-pupil and Georgia is in eighth place spending $9,476.

Efficiency and Cost of Living

The authors also examined the relative efficiency of each state, which they defined as the amount of expenditure undertaken to achieve a given level of success. For example, in the Quality rankings above, New York spends the most money per student ($20,744) and is ranked #31 but Tennessee is #30 (achieving virtually the same) and spent less than half as much ($8,759).

The authors did one efficiency comparison based on nominal spending but they also did one controlling for cost of living.  As they explained, “…using unadjusted spending figures might disadvantage high-cost states, in which above-average education costs may
reflect price differences rather than more extravagent spending. For this reason, we also calculate a ranking based on education quality per adjusted dollar of expenditure, where the adjustment controls for statewide differences in the cost of living (COL).” 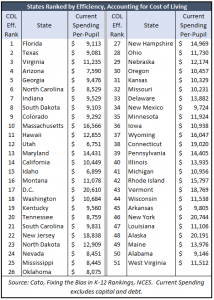 The 2018 WestEd K-12 cost study said Kansas schools are very efficient, but lead author Lori Taylor says that was only comparing Kansas schools districts to each other, and not a comparison to other states.

The study says when adjusting for cost of living variances, “…no significant relationship is found between spending and student performance, either in magnitude
or statistical significance. This does not necessarily imply that spending overall has no effect on outcomes (assuming causality), but merely that most states have reached a sufficient level of spending such that additional spending does not appear to be related to achievement
as measured by these test scores.”

Representative Kristey Williams (R-Augusta) explains that it is important to make sure threshold funding is met to ensure efficiency, but beyond that there are questions.

“There is some threshold of money that absolutely needs to be present in order to provide a basic good education and we want to do that,” said Williams. “Once you go beyond that threshold it becomes very unclear if we are really doing anything to help improve success or not.”

A key reason the Cato Institute found Kansas to be inefficient on education spending as noted in the study was, “that unionization has a powerful negative influence on educational outcomes, and that, given current spending levels, additional spending has little effect.” The study’s lead author Stan Leibowitz, an economics professor at University of Texas Dallas, say that effect unions had on the study was unexpected.

“There is a very strong negative effect between the degree of unionization of the teachers and the performance of their students,” says Leibowitz.

Of states that went from the non-union to heavy union presence Liebowitz says those states dropped many places. “Unionization has a big impact on decreasing the performance of the students in the classroom,” says Leibowitz.