Members of the Kansas House sidelined legislation that would have added $500 million in new funding to public schools over the next five years. Good luck figuring out how your representative voted on it, though. Thanks to House rules and lawmakers terrified of staking a public position, there’s no formal record of how lawmakers voted.

The default position of the House means many votes aren’t formally recorded. House rules require roll call votes for final passage of any bill. However, before taking a final vote on any legislation, lawmakers first vote to recommend legislation for final passage. This is often done on a voice vote. Unless 15 House members request a roll call vote, there is no formal record of how legislators vote.

On Monday, lawmakers debated HB 2445, a bill to increase school funding by $500 million over the next 5 years. Lawmakers debated and voted on a number of amendments to the underlying proposal. For example, one amendment would have increased the funding by an additional $295 million. It failed, 46-76. Because at least 15 House members requested a roll call, constituents can see how their Representatives voted on the amendment. (A screen shot from the House Journal is pictured below.) 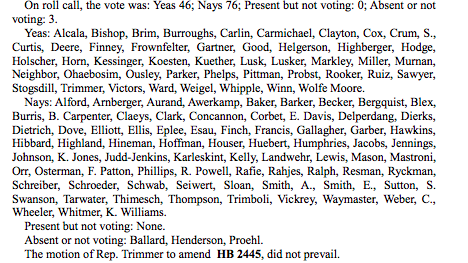 The default position of the House is to use voice votes for almost everything except final action votes, constitutional amendments, concurrent resolutions, extending the Legislative session in even-numbered years, ratifying amendments to the U.S. Constitution, and calling a Convention of States. Many times, a vote tally is dependent on whether the “yeas” or the “nays” yell louder, and constituents don’t even know by how wide a margin an item passes or fails.

During Monday’s debate, an amendment to HB 2445 to create a school mental health intervention pilot program appeared to fail, when mumbling “yeas” were later dwarfed by resounding “nays.” After a roll call, the amendment passed by a decisive 107-14.

Legislators don’t want you to know. They’re going to be asked to vote on the same bill again, perhaps with a few different amendments. It appears they don’t want constituents knowing where they stand on the issue beforehand.

Meanwhile, the Star endlessly bashes lawmakers for proposing bills without attaching their names, but appears unfazed by lawmakers refusing to attach names to their actual votes.

Here’s the Kansas City Star on “transparency” from a few months ago.

“In the past decade, more than 90 percent of the laws passed by the Kansas Legislature have come from anonymous authors. Kansans often had no way of knowing who was pushing which legislation and why, and the topics have included abortion, concealed weapons and school funding,” the Missouri daily paper bemoans in a November news story that calls Kansas “dark and secretive.”

“The House voted down the funding increase in HB 2445 on a 55-65 vote. The first-round vote was not a roll call vote, so there is no record of how lawmakers voted,” the story reads. There’s no accompanying photo of dark thunderclouds, no mention that it only takes 15 lawmakers to request a roll call vote, and no use of words like “secretive” and “dark” anywhere to be found.

From Twitter, constituents can find speculation of how some people voted. Rep. Tom Cox, for example, tweeted almost the entire Democratic caucus voted against adding $500  million in new funding to schools.

Lawmakers have great motive for keeping controversial votes on school finance under wraps. Some lawmakers worried the increased school funding proposal would require a tax increase. Others worried the proposal doesn’t spend enough. House members will be asked to vote on it again. Today, lawmakers are scheduled to debate the same legislation a second time. They can vote with a clear conscience, knowing constituents will never know who changed their votes or why.

Yesterday’s secretive display was a sham and a shame, but don’t expect the Star to demand answers. It appears they can only be moved to outcry if they can use it to bash the right-of-center in some way. If the next school finance bill spends less and passes, look for the Star to suddenly take notice that lawmakers didn’t have to put their initial votes on the record. If lawmakers pass a school funding bill that adds more than $500 million in new funding, look for Star editorial writers to look the other way on yesterday’s vote.

So much for transparency.