The new draft of a joint Emporia and Lyon County zoning proposal is drawing concerns of government overreach.  The zoning draft has garnered attention from people in the community, notably on Facebook, for what they view as government overreach. For example, the plan bans barbed wire fence for agricultural use. “No barbed wire or other sharp fence and no electrically charged fence of any type shall be erected or maintained.”

This is just one example in the plan that is seemingly out of touch with rural communities. However, according to Sam Seeley, the Lyon County Planning, Zoning, and Floodplain Management Director in an email to The Sentinel says that “Some of the more radical language is meant for the city and not the county. Barbed wire is allowed, and we aren’t changing that use.” 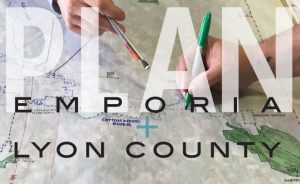 The report was done by Eugene, Oregon-based Urban Collaborative which, on its website notes, “Our goal is to create places that support and sustain an area’s or an installation’s diverse missions and that are environmentally, economically, and socially sustainable.“ The firm’s main accomplishments listed their website are redesigns of military bases for the Department of Defense and urban growth projects.

Urban Collaborative considers the Lyon County plan a success, noting that the Emporia City Council and Lyon County Commission unanimously adopted the plan. The plan was adopted as a zoning draft, however, and the zoning recommendations in the plan are far from adopted.

Urban Collaborative was awarded the contract in November 2016. The Sentinel tried to track down the minutes from the County Commission Meeting but they are mysteriously missing. The Lyon County Clerk’s office was unaware that the minutes were missing for November and December of 2016. Seeley says the firm was paid $153, 052 for the regulations. According to an Emporia Gazette article, Urban Collaborative was paid $254,162.15 for the zoning plan. The firm was picked as part of a competitive bid process.

“They put it all together and they present that as a draft and then we decide whether or not we want to keep those things or not,” says Seeley.

The Emporia and Lyon County Joint Comprehensive Plan is in the middle of a multi-year process to rezone the city and county. The zoning plan is still in draft at this point and the zoning regulations have not been adopted yet.

“There will be several meeting between now and the final document to whittle down what shouldn’t be in there and what should be,” says Seeley.

The proposal lays out the reasons why the project was undertaken, including a desire to preserve agricultural landscapes. The zoning recommendations seek to control ag land in Lyon County like it is a painting, focusing on aesthetic features such as “undeveloped land” and “consistent fencing.” There is little mentioned regarding the economics of farming and rural life.

The proposal is an active shift away from use-based, meaning how a piece a land will be used.  Instead, zoning would be “place-based,” dictating how property will look like and be used. In place-based zoning, location viability trumps land potential use. In reality, place-based pre-determines what space or building can be through a vision of what the county wants it to be, not how those who own it could use the land or building. “Instead, a place-based approach to zoning offers a regulatory toolbox that envisions a certain physical outcome in a built environment.”

However, a study by the National Bureau of Economic Research found that zoning restrictions put in place to encourage growth actually inhibited economic growth by 50% between 1964 to 2009.

Activities allowed on farmland is very narrow. Land can only be used for agricultural purposes only, and uses that are not deemed agricultural would require a conditional-use permit. Examples are retail sales that include products not expressly grown on the property. Commercial ag storage of any kind would require a use permit, as well as livestock sales or commodity brokerage. Any land used for recreational purposes, even if livestock or plants are on the property, is forbidden without a permit. The plan specifically mentions no golf or driving tees with a permit, but there is no word if a shooting range on rural property would require a special use permit.

The zoning proposal is, at best, out of touch with the ag community, and at worst, actively attempting to undermine it.  And there may be a reason for that. Zoe Anton, Urban Collective’s project manager for the zoning proposal. actively advocates against cattle and poultry production. Anton is vice-president of Craft Crickets, a Eugene, Oregon company that promotes and trains people to raise crickets for food. Anton notes her belief that crickets are better than cattle in an article in 2017. A Craft Crickets webpage says the company believes that cattle, poultry, and pork are polluting the environment.

The cattle business is an important driver in the agricultural economy in Lyon County. Regardless of how delicious crickets may be, the inherent bias in Anton’s beliefs on cattle ranching should have been disclosed.

“As time goes one we will come to an understanding of which part applies where and how to enforce that because we know it’s Kansas,” says Seeley. “Agriculture is a main point for us and we want to preserve agricultural land and landscapes, so we have to make sure our regulations support that.

The economic understanding of how those in agricultural get by year to year is entirely lacking in the proposal. The proposal repeats the desire to preserve agricultural land while ignoring the economic realities of owning and working agricultural land. Most Kansans are very aware of the side jobs farmers and their families have to make ends meet. A Marketplace article from 2015, notes 50% to 60% of farmers have a second job. The code regulations of the zoning proposal would create barriers for farmers to make money on the side or start a second business on the land that they own.

A picture of what downtown would ideally look like after being re-zoned is remarkably different than Emporia looks today. The downtown pictures specifically look like every other urban mixed-use space that can be seen in places like Overland Park and Denver, with a Panera on the ground floor and loft apartments on top. In other words, Emporia’s distinct character could be a code violation.

Seeley wants people to reach out to his office regarding the zoning proposal. Residents can reach the Planning, Zoning, and Floodplain Management Office on Facebook, by email sseeley@lyoncounty.org or phone at 620-341-3471.

“I want to make sure I am creating a document that supports our community and not go against what our values are,” says Seeley.