A June 22 press release from the Kansas Association of School Boards (KASB) claims school leaders discussed the importance of getting factual information to the public during its 4-week advocacy entitlement tour.  Without providing specifics, the release says, “Board members expressed concerns about what they said are misleading advertisements and statements from some organizations….”

That accusation is pretty rich considering the degree to which education officials routinely and consciously mislead the public.  Predictably, the document distributed on their tour (and unpubished as of this writing) is loaded with inaccurate and misleading claims.

Deeper in the document, KASB implies legislators artificially increased state aid when they “…chose to make the 20 mill statewide property tax a state revenue.”  The truth is that in 2014, legislators discovered that the 20 mill state property tax for schools wasn’t being reported as state revenue by the Department of Education, and action was taken to ensure accurate reporting thereafter.

Their entitlement mentality is on full display in the KASB document with a comparison of school funding and personal income.  School district officials think they are entitled to a share of your income and it doesn’t matter whether you really have the income.  Personal Income reported by the Bureau of Economic Analysis counts some things as income that never show up in a paycheck, like the employer’s payments for health insurance and retirement.  Government transfer receipts are also counted in Personal Income and some of that ‘income’ cannot be handed over to schools, such as medical benefits and corporate gifts to nonprofits.  The portion that is technically taxable doesn’t represent money laying around for schools to grab (veterans benefits, unemployment benefits and social security benefits). 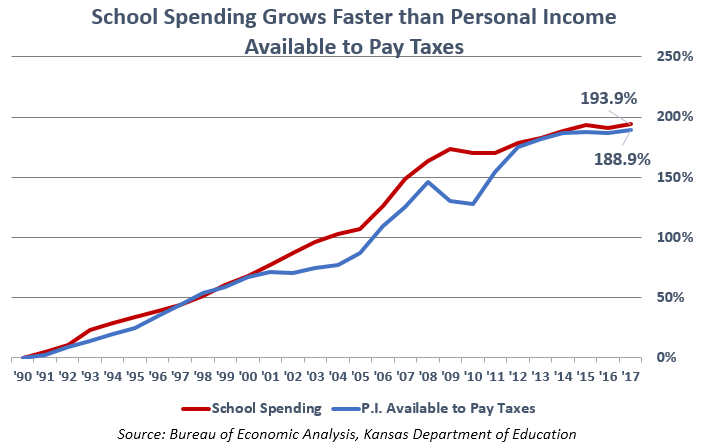 And let’s not forget that tax increases have seriously reduced Kansans’ disposable income.  The state sales tax rate was 4.25 percent in 1990, and the increase to the current level of 6.5 percent more than made up for the slight reduction in individual income tax rates.  And most city and county property tax mill levies have dramatically increased since 1990.

School lobbyists’ demand for a ‘taste’ of every extra dollar theoretically earned by citizens is particularly offensive.  The point of school funding is not to let unions, school officials and taxpayer-funded KASB ‘wet their beaks’ but to educate students.

KASB claims Kansas public schools have the 10th highest student achievement in the nation, but that’s not true.   Rankings on the National Assessment of Educational Progress (NAEP) range from the mid-teens to the low 30s.  Even the best ranking on NAEP – 4th Grade Reading for Low Income students – is deceptive, as just 24 percent of those students are proficient. 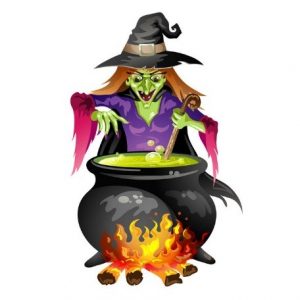 So how does KASB account for claiming Kansas to be #10 overall?  They brew their own formula! They include factors that don’t measure actual learning (graduation rates), they count some achievement levels twice and they use ACT and SAT scores in ways advantageous  to states like Kansas with lower minority levels.  Then they apply undisclosed weighting factors (and maybe some eye of newt for good measure) and a #10 ranking magically rises from the cauldron.

And miraculously, states ranked #1 to #9 each happen to spend more money than Kansas…because, you know, spending more money is the cause of all things wonderous.

Except that’s not true, either. 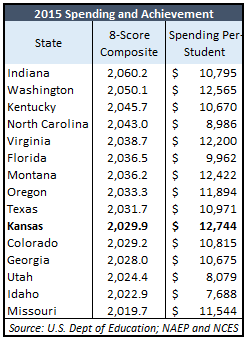 2015 is the most recent year for which NAEP achievement and per-pupil spending data is available.  Nine states had higher composite scores and spent less than Kansas. A few of those states (Washington, Virginia and Montanna) spent just a few hundred dollars per-student less than Kansas but the others spent dramatically less.  Kansas spent $12,744 per-pupil that year but North Carolina had better outcomes while spending just $8,986 and Florida only spent $9,962.  Oregon spent 7 percent less than Kansas, and Indiana, Kentucky and Texas spent about 15 percent less while getting better results.

Another five states had very similar scores while spending a lot less than Kansas, including Utah at $8,079 and Idaho at $7,688 per-pupil.

The 8-score composite tallies individual scores for Reading and Math in 4th Grade and 8th Grade for low income students and those who aren’t low income.

Kansans certainly deserve factual information about student achievement and school spending, but they cannot count on getting the truth from local school boards and KASB lobbyists.