Economist Thomas Sowell may have had Kansas in mind when he said, “No one will really understand politics until they understand that politicians are not trying to solve our problems. They are trying to solve their own problems–of which getting elected and re-elected are No. 1 and No. 2. Whatever is No. 3 is far behind.”

Politicians know that spending alone will not improve achievement in public schools. They also know, however, that throwing money at schools is a sure-fire way to solve problems No. 1 and No. 2. This gambit solves the politicians’ problems because most citizens will go along with increased school spending as long as taxes do not increase.

Given the imperative to spend massively on schools and the political necessity of doing so without raising taxes, some politicians insist they can do both simultaneously. A new report from the Kansas Policy Institute says otherwise. Does it ever!

Using calculations provided by Kansas Legislative Research Department (KLRD), the KPI piece explains how Kansans are being set up for a $3.7 billion tax increase over the next four years. This is no misprint. That’s ‘billion’ with a ‘B’.

The KLRD calculation is based on achieving a legally-required ending balance[i] without transferring dollars from the highway fund and with making all scheduled KPERS pension payments through FY 2023.  The spending increases in the KLRD calculation include only those related to approved school funding, the cost of complying with the latest Supreme Court ruling as calculated by the Department of Education (KSDE), and KLRD’s case load estimate for existing Medicaid coverage. 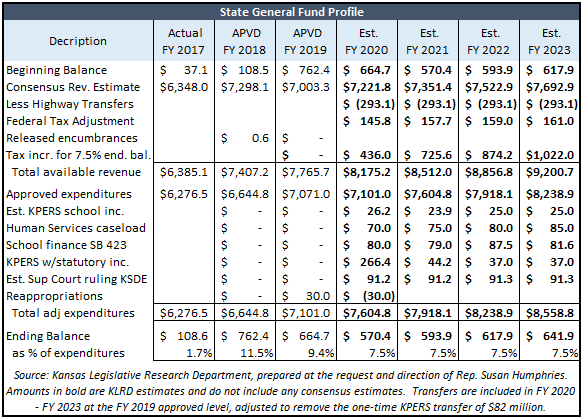 KPI president Dave Trabert notes, “About $624 million of the tax increase is already in place. This is a result of a federal tax reform that eliminates personal exemptions, caps itemized deductions for some people, and because Kansas is ‘coupled’ with the federal tax system, the loss of personal exemptions and capping of deductions also applies to state income taxes.  For the same reason, higher taxes are also imposed on many businesses.”

The roughly $1 billion already approved is obviously not enough. To keep pace with existing demands will necessitate a $2.1 billion tax increase. If elected officials decide to meet KSDE’s $365 million estimate of the latest court demand, another $940 million tax hike will be needed.

Trabert explains that the tax impact of meeting the new school funding demands is greater than it seems. Increasing funding by, say, $100 million per year for five years means spending will be $500 million higher in year 5. This means that over the course of those five years, $1.5 billion more will have been spent than if funding had not been increased.

To include the additional $365 million per year needed to placate the Supreme Court means total school spending would slightly exceed $8 billion in FY 2023. If federal aid remains flat, and local revenue is only nominally increased, per-pupil funding would be $16,520 in FY 2023. 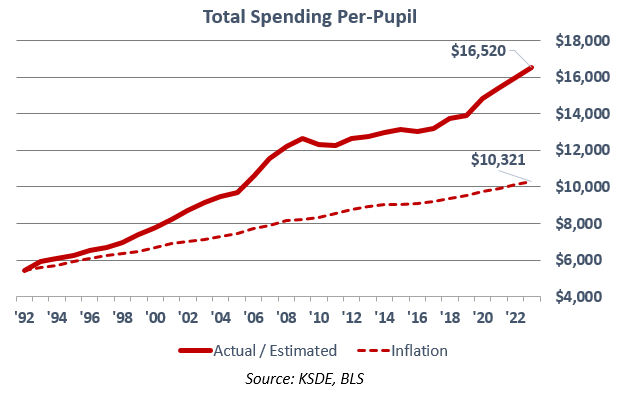 Trabert sums up the Kansas situation nicely: “Those claiming school funding can be massively increased without raising taxes either don’t want you to know the implications for highways, social services and higher education, or they’re afraid to tell the truth about tax increases. Because, you know, getting elected is what really matters.”

[i] State law requires an ending balance equal to 7.5 percent of expenditures.  Legislators and governors have often ignored that legal requirement over the last couple of decades by periodically changing the law to effectively say, ‘except this year.’